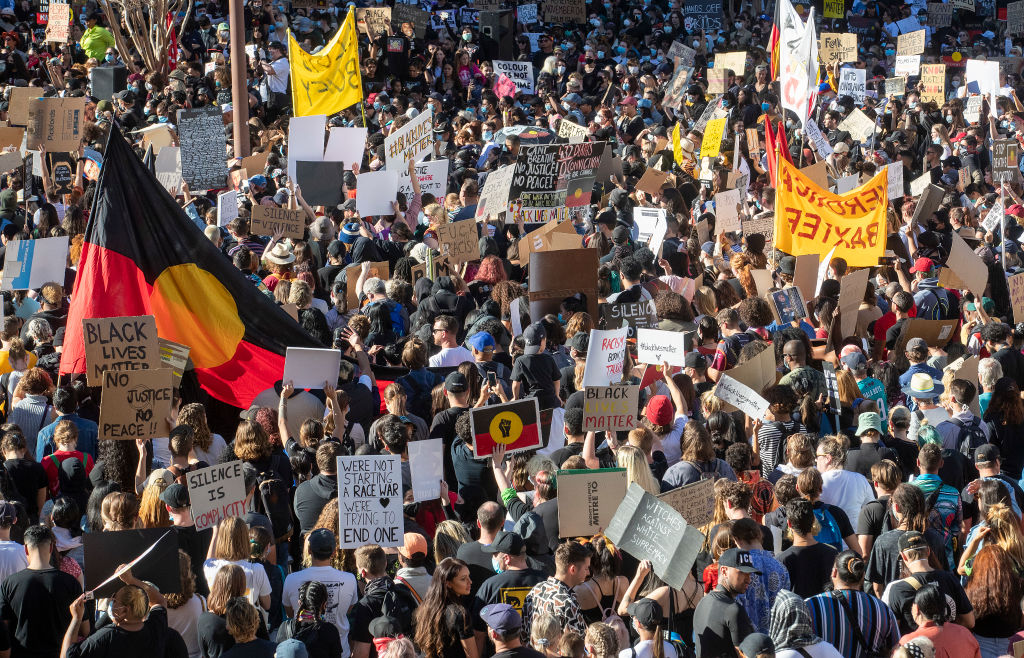 The Sydney Stop All Black Deaths in Custody rally has been declared an authorised public assembly after a late decision by the Court of Appeal.

The decision came 12 minutes before the rallys scheduled start at 3pm outside Town Hall on June 6, and means protesters cannot be arrested for blocking roads along the planned route from Town Hall to Belmore Park.

With masks over their mouths, thousands of people have gathered in the CBD to show support for the global Black Lives Matter movement and protest against Aboriginal deaths in custody.

The crowd stood slightly apart from one another outside Sydney Town Hall as they rallied amid the COVID-19 pandemic.

Town Hall railway station has been closed and there is a large police presence in the city monitoring the rally.

Several protestors climbed on top of a glass entrance to Town Hall Station before police asked them to get down.

The crowd clapped and yelled “I cant breathe” – the latter among the last words of US man George Floyd, before being lead in chants of “whose lives matter?”, “black lives matter”.

The appeal was heard from 2pm after organiser Raul Bassi asked the Court of Appeal to overturn the decision of Supreme Court Justice Desmond Fagan made on Friday night.

Justice Fagan found the document Bassi filed with police last week was “entirely different” to an amended notice filed on Thursday increasing numbers from 50 to 5000.

He refused to approve the public assembly, citing the current coronavirus restrictions on mass gatherings.

“Our respectful submission is that the court will now correct that error and the declaration will be made that it was an authorised public assembly,” barrister Stephen Lawrence said.

Michael Spartalis, for the Commissioner of Police, said the courts decision last night wasnt appealable under the summary offences act.

He added there was no evidence police had agreed to the Town Hall assembly.

Coronavirus: US suspends travel from Brazil for foreigners

Trump: US could impose visa sanctions on countries not accepting deportees