For men who sleep with men, pills that block HIV from taking hold are making unprotected sex feel fun and safe again.

Women arent getting in on that action.

As European countries gradually roll out pre-exposure prophylaxis, or PrEP, priority is going to those most at risk of getting the virus that can cause AIDS, and that means men who have sex with men (MSM). The early results so far show that rates of HIV are plummeting much more quickly among MSM than in other groups.

The specific ways HIV affects women differently have “been a bit of an asterisk,” said Jacqui Stevenson, a U.K. researcher focused on gender, aging and HIV.

Its part of a broader trend over the three-decade fight against HIV thats seen women left out of medical research, diagnosed late and facing severe stigma.

Globally, women made up more than half of people living with HIV last year, and about 47 percent of new infections. Yet a median of only 19 percent of the participants in clinical trials of antiretroviral drugs were women, according to a 2015 analysis, and just 11 percent of those in studies of potential cures.

And thats despite the fact that in the parts of the world hardest hit by the epidemic, its women who are at heightened risk. In sub-Saharan Africa, adolescent girls and young women aged 15 to 24 made up 10 percent of the population in 2018 — but 25 percent of all new infections, according to 2019 UNAIDS estimates. HIV is the leading cause of death for women aged 15 to 49 worldwide. 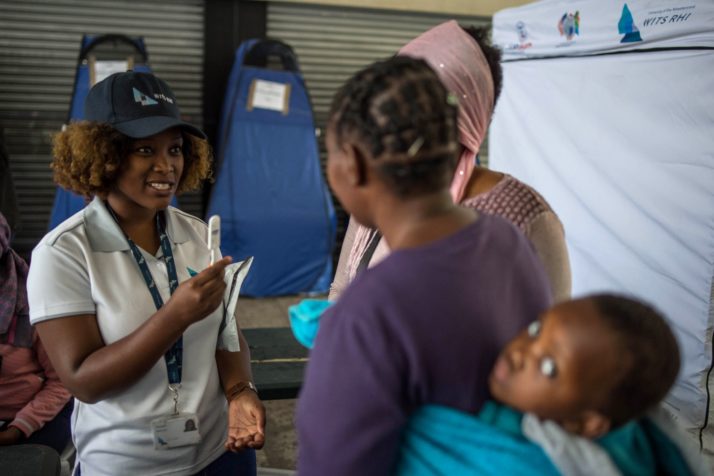 In sub-Saharan Africa, its young women who are most vulnerable when it comes to HIV | Mujahid Safodien/AFP via Getty Images

One persistent driver of disparities around the world, argue some experts: the perception that men are entitled to sex, but women are not.

This isnt to say HIV treatment for men is on track. In the developing world, men are less likely to take an HIV test, less likely to seek treatment and less likely to stick with it. Globally, there were fewer men living with HIV than women in 2018, but they made up 60 percent of the AIDS-related deaths, according to UNAIDS estimates.

Still, throughout the epidemic, theres been more research on how prevention and treatment measures work on mens bodies.

In October, the U.S. Food and Drug Administration approved a new type of PrEP called Descovy — but only for men. The manufacturer, Gilead, simply didnt test it in cisgender women, even though the drug could work differently in vaginal tissue than rectal tissue. That decision has sparked criticism of the U.S. drugmaker. Detractors also note that its not clear Descovy works better than Gileads original PrEP drug, Truvada, which is increasingly available in cheaper generic forms. Moreover, trial participants were predominantly white, even though Africans and people of African descent face a disproportionate burden.

Brian Plummer, a spokesman for Gilead (which is also the advertiser presenting Telescope: The New AIDS Epidemic) said that the company and the regulator werent able to agree beforehand about how to test the new drug in women, but that a trial is now planned in women and adolescent girls.

“Women remain underrepresented in HIV research, including PrEP studies,” Plummer said. He noted that setting up a large-scale trial that follows all the rules and lasts long enough to show meaningful results is challenging due to “lack of existing social structures for cisgender women that traditionally support the identification and retention of participants in HIV trials.”

The U.K. is a good example of how countries with a strong track record of helping MSM are not seeing the same improvements for women.

These challenges have consistently plagued HIV research, said the International AIDS Vaccine Initiatives Matt Price, a co-author of the 2015 analysis of the proportion of women in studies. He noted that in many societies, women either need to get consent from a partner, or, as primary caregivers, believe they cant easily spend time away.

Another gap: Early studies usually ruled out women of childbearing age to avoid unexpected effects on a potential fetus. Even now, women who wish to get pregnant soon may be reluctant to participate in a long trial.

The U.K. is a good example of how countries with a strong track record of helping MSM are not seeing the same improvements for women.

In the governments large-scale trial for free PrEP access, theres been overwhelming demand from MSM to participate. However, the relatively few spots specifically reserved for women are going unfilled. Some advocates are worried the National Health Service will eventually determine that theres no need to create a program for routine access to PrEP for women.

PrEP is “absolutely understood as something thats for gay men” among the general public in the U.K., said Stevenson, a trustee for Sophia Forum, an NGO devoted to women with HIV.

Even though PrEP could be important for women with an HIV-positive partner, or who face gender-based violence or — uncomfortable as it may be for providers to discuss — have unprotected sex with multiple partners, “theres nothing most women would encounter that would even invite them to think about HIV,” said Stevenson.

“Youre more likely to hear adolescent girls and young women [in sub-Saharan Africa] saying, Oh, I went to a clinic, the nurse just told me off, she said I shouldnt be having sex, so why was I looking for condoms,” — Jacqui Stevenson, U.K. researcher focused on gender, aging and HIV

Last week, Public Health England published detailed data about HIV in women for the first time. While HIV diagnosis and care for women is generally excellent by global standards, there are clear signs of disparities. Rates of HIV diagnosis are dropping across the board, but reductions among women between 2016 and 2017 were more modest (13 percent) than among heterosexual men (25 percenRead More – Source

Juncker: Brussels will no longer control the time

Asthma Attacks on the Decline Among U.S. Kids