LONDON — Hes the man who brought home a Brexit deal for Boris Johnson — and his reward is to carry on negotiating.

The U.K. prime minister now wants his EU adviser, David Frost, to handle the next phase of the United Kingdoms negotiations with the European Union: discussions about the future trading relationship between Britain and the bloc.

Officials on both sides, U.K. ministers and Brexiteer MPs highlight the key role that Frost, a former diplomat-turned-adviser, played in securing an agreement with Brussels last Thursday and selling that plan to the Tory Party.

Whether or not that deal ever comes into force — it is currently paused after MPs said they wanted more time to scrutinize it — Frost delivered something many said was impossible: a renegotiated deal that both EU leaders and a majority in the House of Commons can support, at least for now.

A No. 10 official said Johnson is hopeful that Frost, known to close colleagues as “Frosty,” would continue working on trade negotiations, although the official hinted he has yet to accept the offer.

“Boris has the ideas, Frosty puts them into practice” — A member of the Boris Johnson team

Not everyone however will welcome him as a trade negotiator, should Johnson continue in office long enough to oversee the next phase in the Brexit talks.

Two Brexiteer MPs, who spoke to POLITICO on condition of anonymity, have not given Frost their unqualified support and want a trade expert to be given a key role in phase two. One MP cited Crawford Falconer, the U.K.s chief trade negotiation adviser in the Department for International Trade, as a potential candidate.

Frost worked as a special adviser for foreign affairs when Johnson was foreign secretary but lost his job when the latter resigned from the Cabinet in protest at Theresa Mays Brexit plan.

Frost then became the chief executive at the London Chamber of Commerce, but continued to work closely with the future prime minister and his small team as they plotted his path to power from the backbenches.

One of those involved said Frost attended meetings with this team roughly every two weeks, but it had been clear from the way he spoke he was in constant touch with the future prime minister.

“Boris has the ideas, Frosty puts them into practice,” the figure said.

Well before Johnson took office as prime minister, it was clear he was planning to replace Olly Robbins, Theresa Mays chief adviser on Brexit, who became somewhat of a bogeyman for Brexiteer MPs.

It wasnt Frosts glittering civil service career, which includes running Europe units in government departments and serving as ambassador to Denmark, that won the trust of the prime minister and subsequently his former Vote Leave colleagues. It was his commitment to Brexit.

“The thing about Frosty is he has got the air of the establishment about him,” a former Vote Leave campaigner who is now in government said. “He had done all these big roles and so on, and Boris trusts him 100 percent. But equally we feel like he is one of us.” 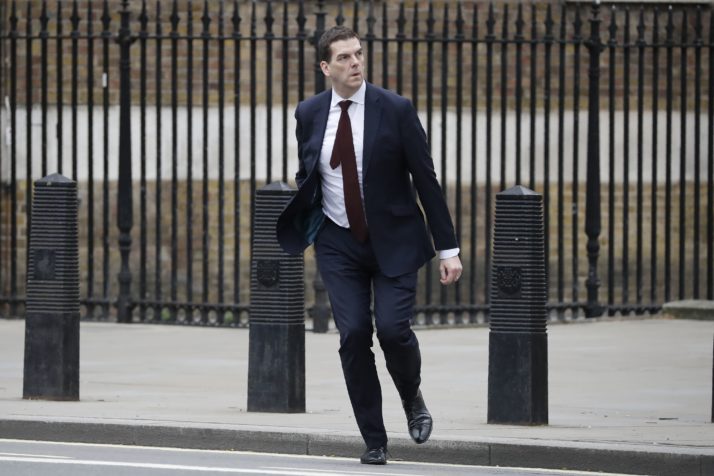 He said Frost had compromised “a bit more than the rest of us,” but Johnsons team trusts him to “end up with the thing that we want.”

“All of us trust him,” the adviser said. “It is quite a difficult thing to get into the Vote Leave gang. There are not many people who have done it.”

One Cabinet minister said Frost had been a “good appointment” who had been key in giving confidence to the European Research Group of Brexit-supporting MPs, without alienating other wings of the Conservative Party. “He was open to discussion, and he met lots of people,” the minister said.

Deputy Chairman of the European Research Group Mark Francois told POLITICO before the deal had been done that the ERG had held a private meeting with Frost “a little while ago.”

“There are some people on the extremes of both sides that dont like him, but he is Boris basically” — A former vote leave figure talking about David Frost

“He struck us as quite a genuine and sincere man. This was refreshing from dealing with his predecessor,” Francois said.

At the London Chamber, Frost had been unafraid to hit back at businesses critical of Brexit — another factor that reassured Brexiteers he was on their side.

In an article for the Telegraph in July, he argued that business organizations appeared to be supporting policies they previously opposed “such as accepting the EU setting U.K. labor market rules, without any say from London, when they spent the last twenty years resisting just that.”

In the same article, he also made the case for “real risk-taking, developing new sectors, setting free those who want to make things happen rather than those who fear the future” — a policy platform not dissimilar to Johnsons.

“[Frost] is the personification of Boris,” the former Vote Leave figure said. “There are some people on the extremes of both sides that dont like him, but he is Boris basically — although, no offense, he is a bit less charismatic.”

Frost was on the front line of negotiations in Brussels, leading a team of between 25 to 30 people from No. 10, the U.K. representation in Brussels, and customs, regulatory and Northern Ireland experts.

The group were sustained on a bad diet of endless sandwiches and pizza, sometimes at the U.K.s Permanent Representation to the EU (UKRep), and sometimes provided by the Commission at the Berlaymont building.

Frost was one of a three-strong negotiations leadership team, according to a figure familiar with the negRead More – Source

MEPs drill down on Goulard ethics queries after hearing

May intervenes to speed up new UK immigration plan