The incoming EU leader is adamant that she wants to create a “geopolitical” Commission that responds to threats from China and the U.S., and shes probably going to have to prove her mettle as a global gunslinger within weeks.

A confidential World Trade Organization (WTO) ruling, issued Friday, allows Trump to trigger a full-blown trade war by imposing tariffs on billions of euros of European exports, from as soon as September 30.

This puts von der Leyen in a political bind. As the American tariffs come in response to European subsidies to the aircraft maker Airbus, Brussels doesnt have immediate grounds to hit back.

To make matters worse, the self-styled “Tariff Man” is threatening a killer one-two punch against Brussels. In addition to Airbus tariffs, expected to be of a value up to €8 billion, Trump is also looking to impose hefty duties on European auto exports that could come as early as mid-November.

“The global trade climate is not good. We have no more natural allies” — Bernd Lange, Parliament trade committee chairman

Officials in Brussels have been watching with horror how Trump used the threat of those same auto tariffs to strong-arm Japan into making concessions on agriculture. The EU fears that a U.S.-Japan trade deal, which is supposed to be signed at next weeks U.N. General Assembly in New York, will reinforce the presidents belief that he can proceed with his gun-to-the-head tactics to extract similar concessions from the Europeans.

On top of these concerns, China has snubbed the EU by not sending a top official to a trade meeting scheduled for next week as Beijing appears to prioritize reaching an “interim trade deal” with the U.S. instead of making concessions on long-standing EU demands for market openings.

“The global trade climate is not good. We have no more natural allies,” said Bernd Lange, chair of the European Parliaments trade committee.

The looming trade escalation also sets the stage for von der Leyens pick as trade chief, Phil Hogan, who has a reputation as more of a brawler than his predecessor Cecilia Malmström. The 1.95-meter tall Irishman told RTE radio last week he would do everything he could “to get Mr. Trump to see the error of his ways” on trade. 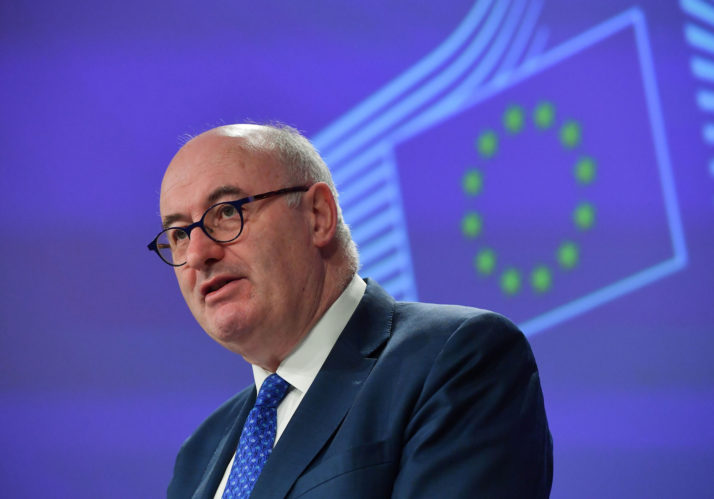 From whiskey to wings

The WTO ruling on Airbus represents the most urgent challenge.

Americas tariff hit list published in April and extended in July covers about $22.7 billion worth of iconic European products — from whiskeys and Dutch Gouda cheese to luxury goods such as handbags — that the U.S. can tax at different rates to claw back damages of probably up to €8 billion. Washington can impose the tariffs as soon as the ruling has been made public, which is expected to happen in two weeks.

Malmström told reporters on Monday that Brussels had pulled out all the stops to avoid a tariff escalation from happening, but said that the Americans “have not engaged” in offers to reach a negotiated settlement.

“We have made concrete proposals but received no reaction. Zero,” said trade committee chair Lange.

Gordon Sondland, the U.S. ambassador to the EU, said that Washington is seeking “an end to subsidies for Airbus and the recovery of damages. However, if negotiations between the U.S. and EU dont elicit a change in this behavior and a recovery of those damages, then the United States will suspend concessions and resort to tariffs.”

Tiziana Beghin, a member of the European Parliament from the Italian 5Star Movement, said the threatened tariffs are a wakeup call for the incoming Commission to develop more robust defense mechanisms in the trade sector.

“The policy of muscle and retaliation is damaging to everyone and does not suit anyone,” she said. “The European Union needs more effective trade defense instruments as soon as possible to enable it to impose sanctions on third countries if unjustified tariffs are applied to European products.”

Besides that self-inflicted wound, the EU expects to have a chance to impose counter-duties against the U.S. in about half a year.

Referring to the various Italian products that are targeted by the U.S. — such as pasta, Parmesan cheese, roasted coffee and olives — Beghin said that the WTO ruling is “worrying and clearly damages Made in Italy.'”

Other targeted food producers have also expressed concern. “Every barrier that a country introduces is of course troublesome. We are in favor of free trade,” said René van Buitenen, spokesperson for the Dutch Dairy Association (NZO). He added that about 2 percent of all Dutch cheese and other dairy products go to the U.S. “If these tariffs were to be introduced, we would need to see whether American producers are willing to pay more or where we can find alternative export markets.”

French wine exporters, who have already been threatened with U.S. tariffs in a parallel trade dispute over Frances digital services tax, called for a negotiated outcome as nearly 20 percent of their global sales — worth over €1.6 billion last year — go to the United States and risk being affected by the duties, according to the Federation of French Wine and Spirits Exporters.

EU’s exemption from US tariffs to expire May 1