Brussels is once again bracing for U.S. tariffs.

Trade talks have yet to begin, and EU trade chief Cecilia Malmström has warned that the U.S. is likely to soon impose retaliatory tariffs on up to $25 billion of European products, as part of a dispute over airline subsidies. Washington has also launched a trade investigation into Frances digital services tax. Crushing U.S. sanctions against Iran and pressure on Europe to cut business contact with Tehran have further soured relations.

It could get even worse. Seven Commission officials and EU diplomats said they fear Trump will carry out a long-standing threat to impose painful auto tariffs as early as November. The EU has said it is ready to retaliate with its own tariffs targeting €20 billion of U.S. exports.

“Compared to one year ago, the number of trade irritants has increased, not decreased,” said Luisa Santos, director for international relations at BusinessEurope. “Its very difficult to keep a positive agenda.”

“If there is a political will, we could come to a solution before the end of the year” — German Economy Minister Peter Altmaier

In a bid to preserve the fragile truce, the Commissions new director general for trade, Sabine Weyand, is in Washington Monday and Tuesday for discussions with Deputy U.S. Trade Representative Jeffrey Gerrish.

The outlook is grim, according to Gary Hufbauer, a senior fellow with the Washington-based Peterson Institute for International Economics: “Trump firmly believes — and has convinced many Americans — that the U.S. has been taken advantage of all these years, and that Europe should make unilateral concessions,” he said.

Trump has repeatedly said he wants to slash the U.S.s $169 billion trade-in-goods deficit with the EU. His 2020 reelection campaign risks escalating the conflict, Hufbauer said: “Trump really believes that confrontation with foreign countries gets him votes.”

In an interview with POLITICO on Thursday, U.S. ambassador to the EU Gordon Sondland said Brussels should get ready for “less whining, more action” from the Trump administration and warned that Washington had “a whole bunch of different tools” at its disposal, including car tariffs, that will have “immediate financial consequences for our friends in Europe.” 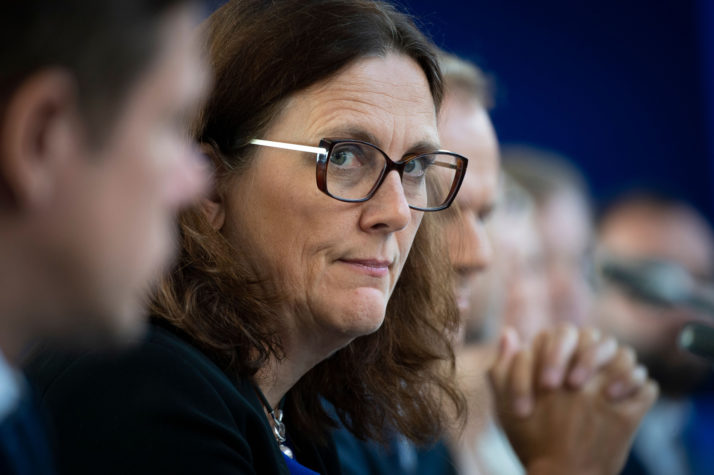 Sondlands comments reflect a growing frustration in Washington over the EUs refusal to bow to American demands on trade.

Trump declared in May that imports of autos and certain auto parts from Europe “threaten to impair the national security of the United States,” and instructed his Trade Representative Robert Lighthizer to address the threat in trade talks during the following six months.

That deadline runs out in mid-November, shortly after Commission President-elect Ursula von der Leyen takes over from Juncker.

There is no indication that trade talks will move forward before then. The two sides have published conflicting negotiating directives, with the U.S. demanding the inclusion of agriculture in the talks and the EU categorically excluding any farm products.

Brussels has also rejected voluntary export restrictions, such as quotas, that the U.S. could use to mitigate the alleged “threat” from car imports.

Sondland expressed hope that von der Leyens inauguration would be “a golden opportunity” for both sides to reengage, but he made clear that Brussels must accept “some agriculture” in the discussions.

The Trump administration is under pressure from the U.S. Congress not to give in on this point: Earlier this year, a bipartisan alliance of 114 congressmen sent a letter to Lighthizer, warning that failing to include agricultural products would risk “significantly jeopardizing Congressional support.”

Von der Leyen has little wiggle room: The EUs negotiation directives, which set out the limits of what the Commission can offer, are decided by EU countries, and France is dead set against including agriculture in the talks.

The French resistance has heightened tensions between Paris and Berlin: Germany is pushing for more flexibility to avoid auto tariffs, which would hit Europes biggest economy just as the export-dependent country risks sliding into a recession.

Germany exported $28.7 billion worth of cars and car parts to the U.S. last year, while French auto and auto part exports to America only amounted to about $900 million, according to the U.S. Census Bureau.

“If there is a political will, we could come to a solution before the end of the year,” German Economy Minister Peter Altmaier said during a visit to Washington earlier this month.