New Ukrainian President Volodymyr Zelensky has set conditions for lifting Kiev's economic blockade of the eastern breakaway republics. But is he in any position to give such ultimatums, held hostage as he is in his own capital?

Zelensky says if the self-proclaimed Lugansk and Donetsk People's Republics (LPR and DPR) want to restore an economic relationship with Kiev, they have to first return the businesses located in their territories under government control.

"We can restore everything in the nearest future, but for that to happen, please return to us the illegally nationalized businesses located in the temporarily occupied territories," he said at a press conference, using Kiev's official term for the two breakaway regions. 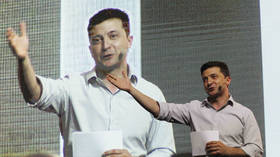 Taking control of those businesses was a response to Kiev's break with them, the LPR's official representative responded.

"It was the Ukrainian Defense Council's unilateral decision to stop all economic relations between the businesses located in the republics and those located in the Kiev-controlled parts of the country," Rodion Miroshnik told RIA. "It was not a nationalization that followed, but an introduction of outside management in the abandoned businesses so that thousands of people wouldn't be left unemployed."

In any event, Zelensky's attempts to set preconditions for the rebel regions ring hollow if one looks at his accomplishments back in Kiev – where he seems to be getting stonewalled at every turn both by the parliament and by the nationalist movement, which has gained tremendous momentum following the 2014 coup and the subsequent rule of Zelensky's predecessor Poroshenko.

The most recent example was the cancelation of a scheduled "politics-free" TV show co-hosted by the Ukrainian broadcaster NewsOne and Russia's Rossiya 1. As several Ukrainian parties rose up against the idea of talking to the perceived 'aggressor' (even though it was supposed to be a people-to-people chat without a political agenda), Zelensky called it a "dangerous PR stunt" that would seek to "divide us again" and see protesters "trash and burn" NewsOne's HQ to the benefit of Russian propaganda.

That was almost exactly what happened. The offices didn't burn, but it certainly looked like it when dozens of nationalist protesters lit red flares and smoke bombs at its doors. The show was called off as NewsOne cited "unambiguous death threats" against its journalists.

On top of that, Ukraine's Council for Television and Radio Broadcasting launched a probe of the channel, now suspected of "fomenting hostilities within the Ukrainian society," which could see it stripped of its license. A committee on "protecting the nation's information space" was also created.

One of the co-organizers of the canceled show, prominent Russian journalist Dmitry Solovyov, called Zelensky out on setting an ultimatum for the breakaway regions not two days after bowing down to nationalists' pressure.

"Zelensky has set an ultimatum. That's nice," Solovyov tweeted. "In his own country, he can't get his own parliament to dismiss the prosecutor general and the foreign minister, and now he's setting an ultimatum to the LNR."

For now, it's Zelensky who was given an ultimatum. By the nationalists. And he conceded, by disrupting the TV show.

Indeed, Zelensky hasn't been able to get the Ukrainian parliament, the Rada, in line on firing some of the top officials of the Poroshenko era. As Read More – Source

Boris Johnson and Michael Gove feud could destroy next government

Stephanie Grisham Out as White House Press Secretary, Will Work for First Lady

The FTSE 100 is boring, full of dead wood and perhaps also pointless