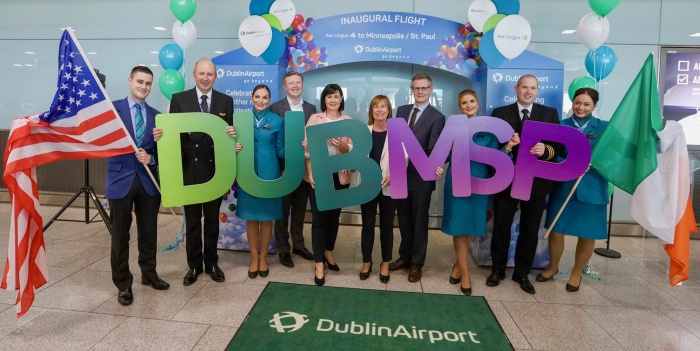 Aer Lingus inaugural service to Minneapolis-St. Paul, gateway to the Midwest, has taken to the skies, marking the start of the airlines 16th transatlantic route.

The new service to Minnesotas famous Twin Cities is the latest North American destination to be unveiled by Irelands flag carrier, as part of its ambition to become the leading value carrier across the transatlantic.

Flight EI089 was operated by a Boeing 757, named after the Irish Saint, Saint Otteran.

The new route will initially operate six times a week, increasing to a daily, year-round service from August.

Up to 2,478 return seats will be available every week.

“The Minneapolis-St. Paul region holds great promise for Aer Lingus particularly in terms of the connections we can offer to UK and European guests as well as those travelling from North America and onwards to Europe.

“As a destination there is both business and leisure appeal and were pleased to report that we are geared up for a busy summer.”

Divided by the Mississippi river, North Americas twin cities, Minneapolis and St. Paul, have a lot to offer international visitors.

Most famously, Minneapolis is home to Mall of America.

Located in Bloomington, it is the largest shopping and entertainment centre in the United States and the number one tourist destination in the entire Midwest, attracting over 40 million visitors each year.

Leveraging Dublins position as a hub airport, UK travellers flying to North America with Aer Lingus, can enjoy the convenience of connecting from 14 regional UK airports.

Guests can also pre-clear US Immigration and Customs before stepping on board their transatlantic flight, skipping lengthy queues on arrival stateside for a swift and smooth welcome to the US.

SUITE DREAMS Wish you were here? Conde Nast Traveller reveals most luxurious hotels in the world 2021