This article is part of the special report: The Big Vaping Dilemma.

Large numbers of British cigarette smokers will switch to vaping once the U.K. leaves the block, they argue, if looser British tobacco laws replace tighter EU limits on nicotine advertising and packaging.

Tobacco laws appear likely to mark one of the U.K.s first post-Brexit breaks with EU law.

The House of Commons science and technology committee recommended a review of tobacco legislation last year, to create a “more risk-proportionate regulatory environment.” The governments Department of Health and Social Care agreed, saying it would look to “sensibly deregulate without harming public health” after Brexit.

Packaging for e-cigarettes currently carries tobacco-like warnings and, in some cases, a large “hazard” symbol.

The signals from London are a coup for the rapidly growing vaping sector in the U.K., whose manufacturers claim their products can significantly reduce the toll from smoking-related disease in England, which kills at least 79,000 annually.

Not all U.K. policymakers are on board. Though lawmakers and U.K. Chief Medical Officer Sally Davies agree that vaping products are far less risky than smoking, she recently advocated tightening rules on vaping ads and vaping in public.

With Brexit still pending, the Department of Health and Social Care highlighted that existing EU rules for e-cigarettes still apply.

“There are strict rules in place to prevent tobacco companies from promoting their products — including e-cigarettes,” a spokesperson said in a statement. “We take the unlawful promotion of tobacco and other nicotine inhaling products very seriously and expect any organization found to be flouting the rules to be investigated.”

Viewed suspiciously in many countries like Norway, and banned in several others including Thailand, e-cigarettes have been embraced as a quit-smoking tool in mainstream British public health policy. 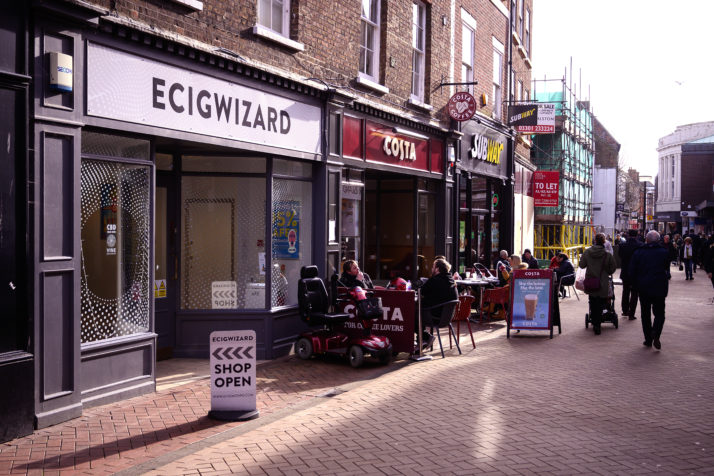 The move was early evidence the U.K. could break with EU regulators on vaping.

The following year,EU countries, including the U.K., implemented the Tobacco Products Directive (TPD), which strictly limited the potency of e-cigarettes and contained strict rules on advertising and packaging.

“The regulatory dogs dinner that we seem to have now blights the lives of about 3 million vapers in the U.K. and harms smokers who might otherwise decide to switch to safer products,” said Sarah Jakes, chair of the New Nicotine Alliance, during a parliamentary hearing last year. “This country can do better in harm reduction, and Brexit is probably the perfect opportunity to do so.”

During an evidence hearing last year, then-Public Health Minister Steve Brine would only say that the existing laws would be reviewed.

Packaging for e-cigarettes currently carries tobacco-like warnings and, in some cases, a large “hazard” symbol. Other EU restrictions include nicotine strength, bottle size and the dimensions of the tank in which the vapor is produced.

“The packaging restrictions imposed on vaping products by TPD are more stringent than those for many hazardous products, including bleach,” said Dan Marchant, board member of the U.K. Vaping Industry Association (UKVIA) and co-owner of online retailer Vape Club.

The U.K. government first mooted the idea of reassessing the Tobacco Products Directive, “including as it applies to e-cigarettes,” two years ago.

“The U.K.s exit provides opportunity to alter the legislative provisions to provide for improved health outcomes within the U.K. context,” the Department of Health said in its July 2017 Tobacco Control Plan, “Towards a Smokefree Generation.”

While U.K. laws place significant restrictions on health claims, John Dunne, director of UKVIA, told the parliamentary committee that all aspects of advertising should be looked at post Brexit.

“The public health message is not getting out there in an efficient and effective manner,” said Dunne. “More people think that vaping is just as bad as, if not worse than, smoking than they did four or five years ago.”

Philip Hammond to Boris Johnson: No Brexit dividend for NHS

Five years after Charlie Hebdo attack: ‘What has changed is the way people see cartoonists’

What You Need to Know About Fever in Adults