“It was safe in theory, get in,” are not the words you want to hear while boarding a flight. As Boeing reportedly seeks to reduce real-life testing of its planes, experts doubt that this approach will ever replace genuine tests.

The US aircraft manufacturer Boeing appears to have some far reaching plans on reducing actual physical testing of its future aircraft for the sake of cost effectiveness, Reuters reported recently. 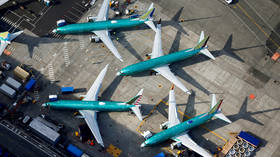 Over the decades, aircraft testing has evolved to become incredibly elaborate and rigorous. It involves tests, which, among others, see aircraft parts and whole planes being put through various extreme conditions like excessive loads, high pressure, intense heat or freezing conditions. The certification process also includes numerous test flights to ensure that an aircraft is absolutely safe.

Now, Boeing reportedly plans to reduce the amount of physical testing, as well as the number of test flights, and rely heavily on “certification through the analysis,” which in fact means computer simulations. This comes at a time when the company is still struggling with the fallout of the 737 MAX affair, which saw the fleet of those passenger jets being grounded following two deadly crashes allegedly linked to onboard software issues.

Flight simulators have been a thing for decades already and they can indeed provide a genuine experience, yet the idea of conducting some actual physical tests that way raised a few eyebrows – simulation of a structure would represent its ideal model, not a real thing with potential flaws or technological quirks.

Boeing did not confirm or deny the Reuters report, telling the news agency quite ambiguously that it has been “looking holistically at our design and certification processes” after the 737 MAX affair. RT has contacted several departments of Boeing, as well as the Federal Aviation Administration (FAA) for comment, but did not receive any response on the issue at the time of the story publication.

It simply does not work in logic

While the US aircraft manufacturer seemingly hopes that the new approach would help it slash development costs and reduce the number of labor intensive physical tests, its apparent quest for profit might in fact bring more trouble than benefit, analysts warn.

“I don't think there's any scenario, where a computer-simulated stress test would be better than a physical one. It simply does not work in logic,” Alessandro Bruno, independent international affairs and aerospace industry analyst, told RT. “Combination of the two, sure.”

Also on rt.com Profit v passenger safety: Why the US was the last to ground troubled Boeing jets

Bruno believes that a computer simulation could be useful for early development, to reduce costs of testing ideas that might not work, but cannot be the only way of evaluating the final product, or replace actual test flights.

“Computer models are very advanced because they are based, after all, on our own experience, accumulated over many years. But no matter how advanced the computer models might be, they are still indicative,” he added.

Yuri Sytnik, Russia's honored pilot and a member of the presidential committee on aviation development, also warned that no existing software can replace actual testing and the job of real test pilots, no matter how sophisticated it is.

“Programs are made by humans, and humans make mistakes, including in the said models. Just like Boeing already made a mistake with 737 MAX 8 software,” Sytnik said.

The planes have been crashing and will continue to crash, either due to human errors or technical issues with the planes themselves. If it was that easy, a program to eradicate crashes wouldve been written a long time ago.

Current US regulations indeed allow aircraft makers to use both actual physical testing and computer analysis to demonstrate the passenger-worthiness of their planes.

Meanwhile, the idea of sticking more to computer simulations is not something that only America has to deal with as civil aviation regulators around the world seem to be increasingly receptive of such ideas.

“Over the past 20 years, the testing methods (which used to be flight tests for a very large part) have undergone major changes – both with the emergence of (more) ground (laboratory) testing and mathematical modelling / computer simulations,” the EuropRead More – Source

Gaetz: Hunter Biden and Whistleblower Would Likely Be Witnesses