DUBLIN — If one person could embody the paradox of Irelands tech boom, John would come close.

By day, his job is to do whatever it takes to maintain the five-star ratings of Airbnb apartments in the Irish capital. He fixes appliances, cleans, and responds to guest complaints at a string of Airbnbs managed by an agency in Dublins city center.

By night, John sleeps in a vacant Dublin property as one of Irelands record 10,000 homeless people. His zero-hours contract means he does not know how long hell work each day — or how much hell get paid — with hours ranging between two and 13.

Ireland is in the throes of a severe housing crisis, with hundreds of families priced out of the private rental sector, often due to evictions, and forced into emergency accommodation in hotels or bed and breakfasts.

House prices, rents and homelessness have all hit record highs, even as tech giants and multinationals swell employment figures and GDP.

With Brexit absorbing all political energy, the government has failed to stop the crisis, which has continued to worsen year by year despite intense public pressure.

“The tourists are in the apartments, and the Irish people are in the hotels,” John, who insisted on a pseudonym and that his company not be named to protect his job, told POLITICO.

The crisis has been a long time in the making. A phalanx of international investment funds bought up Irish property and mortgages at fire-sale prices following the crash a decade ago. At the same time, Irelands building sector collapsed, many of its tradesmen emigrated, and lending for construction evaporated, causing population growth to outstrip house building.

Now, house prices have almost doubled since their 2012 low, and rents have been rising by double figures annually. As investors seek to cash in by raising rents or foreclosing on houses owned by people in mortgage arrears, so-called vulture funds have become public bogeymen and the target of protests.

The government has also been accused of facilitating the funds with favorable taxes and lax tenant protections by the United Nations special rapporteur on the right to adequate housing, which singled out Ireland and five other countries for criticism in a recent report. 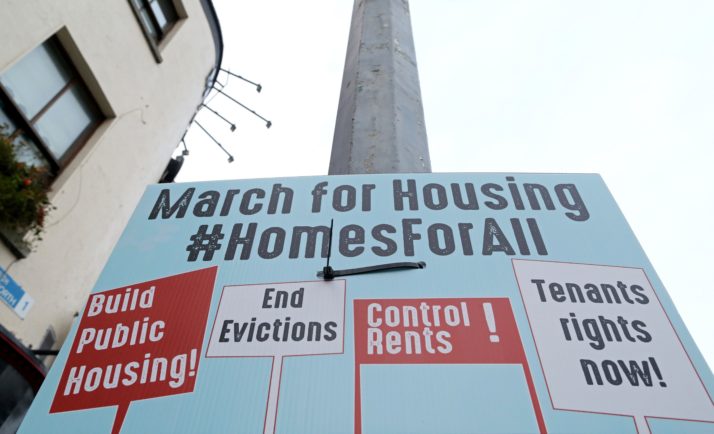 Dublin has responded to the crisis by tweaking rules around the edges of the housing market: limiting rental price hikes to 4 percent annually in the highest pressure areas, cutting building regulations, and offering other incentives to developers. But the changes have done little to fix the fundamental problem: a shortage of homes at prices low enough for middle-income earners to afford.

National and local authorities in Ireland have a strong aversion to intervening directly to increase supply, partly due to poor past experience with some public housing developments and the difficulty of accumulating debt to finance such projects.

With Brexit absorbing all political energy, the government has failed to stop the crisis, which has continued to worsen year by year despite intense public pressure.

“The reality is their policies to date have very much been facilitating the housing industry, rather than facilitating affordable housing for people. That hasnt worked, because the industry are very much taking everything they can get and not giving much back in return,” said Lorcan Sirr, lecturer in housing studies and urban economics at the Technological University of Dublin.

A visitor might look around Dublin and see a boom city.

Brexit has brought an influx of financial firms from London; Google, Facebook and Reddit have recently announced expansions in the city. The horizon of the capital is filled with cranes, and in some cases whole city blocks are being transformed into shiny corporate headquarters, co-sharing offices, hotels, and capsule living spaces aimed at well-heeled international students.

Yet the new developments sit side by side with damp and overcrowded buildings that have been repeatedly subdivided to fit more residents as rents have ballooned out of proportion to wages. The Dublin region wildly outpaces rural areas, but average monthly rents nationally are €1,350 according to property website Daft, which is just under 45 percent of the average earnings of €3,050, according to the Central Statistics Office. Over 85,000 people are on the waiting list for social housing; the amount of affordable housing being provided by developers falls far short of demand.

“The problem is the shortage isnt being met for several reasons. One is that its much more profitable to build student housing and hotels,” said Sirr, the housing lecturer.

In Dublin it is common for working couples to live in a double bedroom, which frequently commands rents of over €1,000. Students, who often come from Latin America to learn English while working part-time, can pay €100 a week for a bunk in a small bedroom transformed into a dormitory shared with five other adults.

“Theyre taking the houses and filling them with immigrants and theyre packed in like sardines,” said one Irish student attending a workshop on how to occupy buildings by protest group Take Back the City. The student, who declined to give her name, likened conditions in the capital to the inner-city slums that were demolished by the state amid large-scale public housing development during the 20th century. “Tenements didnt end in the seventies. We still have tenement-esque apartments in this city.” 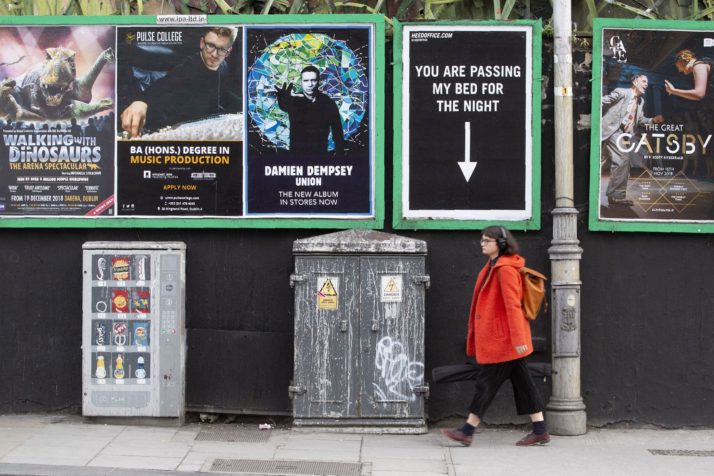 A woman walks past a poster pointing out the space where a homeless person might sleep, amongst advertising posters in Dublin | Paul Faith/AFP via Getty Images

The result is a stark and visible inequality in Dublin, with rough sleepers, beggars and dilapidated housing side-by-side with gleaming new corporate offices and costly cafés.

U.S. multinationals including Apple, Google and Facebook have chosen Ireland as their European headquarters, attracted by a competitive tax system, an accommodating government and a skilled workforce.

They have brought with them a touch of Silicon Valley: skilled workers and a thriving tech scene, but also non-disclosure agreements and the kind of zero-hours, gig-economy jobs John works in. There are also concerns about Dublins ability to absorb an influx of highly paid tech employees, and whether this could push the housing market even higher — as happened in U.S. tech hubs such as Seattle or San Francisco.

Among the tech firms with Dublin HQs is Airbnb. Short-term holiday lets have been blamed for exacerbating rising rents in many European cities with some, like Barcelona, taking steps to limit the proliferation of Airbnb rentals.

In Ireland, too, Airbnb has come under fire. In 2017, Dublin City Council said Airbnb is having an “adverse effect” on the capitals rental market.

“While there are genuine housing concerns in Ireland, experts agree they are not caused by home sharing but factors like house building not keeping up with demand and population growth” — Airbnb spokesman

In October last year, the companys headquarters took part in an open-doors event in which the public were welcome to explore buildings normally closed to visitors. Rather than the sightseers, housing protesters stormed the building, temporarily occupying it in protest at Airbnbs perceived role in exacerbating the accommodation crisis.

Airbnb argues that in Ireland, lets available on its platform are mostly spare rooms rather than whole properties, and that overall it has boosted the Irish economy and is helping owners afford housing rather than contributing to the crisis.

“While there are genuine housing concerns in Ireland, experts agree they are not caused by home sharing but factors like house building not keeping up with demand and population growth,” an Airbnb spokesman said.

The seizure of Airbnb HQ was the latest in a wave of occupations. Aside from the companys offices, activists mostly targeted vacant properties to demand that authorities seize and transform them into residential homes. 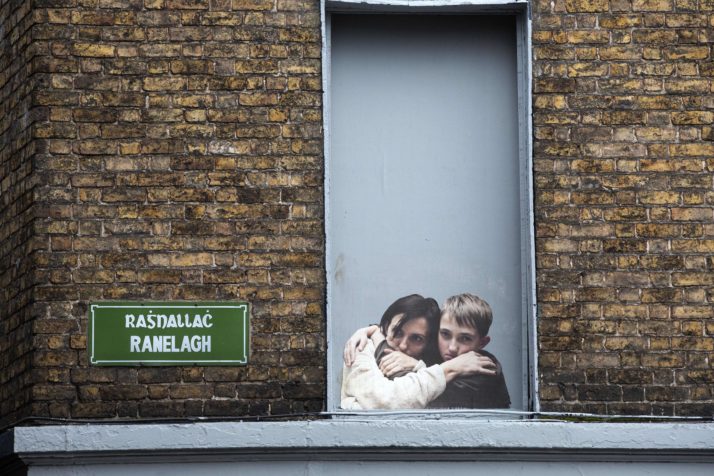 Part of a mural is seen on a boarded-up property, depicting an eviction | Paul Faith/AFP via Getty Images

A sluggish system to deal with vacant and derelict sites combined with the long tail of the housing crash, which bankrupted many entities and froze developments in mid-construction, has ironically left Dublin peppered with empty buildings even as record numbers sleep on the streets.

And in cases where vacant sites are being brought back into use, it is often for hotels and short-let rentals, according to the Peter McVerry Trust, a homelessness charity which purchases and transforms vacant buildings into residential homes.

Aoife Corcoran, who investigates the ownership of vacant properties to try to acquire them for the charity, said her research was increasingly finding sites being converted into hotels and short-term lets.

“When we go to research empty properties, planning has gone in for short-term lets. In terms of how much of a problem it is, its a huge problem within the city in terms of the availability of rental accommodation,” Corcoran said.

“Its all different sorts of things. Airbnb is one example, holiday lets, hotels being built on sites that could be used for housing as well is a bit of an issue.”

Even the tech industrys own workers are feeling the pinch of the housing crisis.

Over the course of 2018, software developers Padraic Rowley and Sam Heavey got together with a group of friends Read More – Source