PARIS — While U.S. President Donald Trump is pushing for a trade deal to slash his countrys yawning deficit with China, it was his French counterpart Emmanuel Macron who landed a €30 billion aviation contract with Beijing on Monday.

China concluded a deal to buy 300 aircraft from Airbus during President Xi Jinpings state visit to France. The value of the deal was twice what was touted last year, and only compounds the woes of U.S. manufacturer Boeing, whose 737 MAX planes have been grounded across the world this month, after two fatal crashes.

The deal struck in France will ratchet up pressure on Trump to come good on his long-promised trade accord with China. That agreement seemed to be facing headwinds last week when Trump warned that tariffs on China would remain in place for a “substantial period” even if a Washington-Beijing deal is struck.

Macron on Monday stressed the “colossal progress” needed to rebalance trade between the two countries — the EU ran a trade in goods deficit with China of some €177 billion in 2017 — while also hailing a slew of deals done in the health, infrastructure, transport, renewable energy and financial sectors.

“In the aeronautic sector, the conclusion today of a big contract in terms of A320s and big transporters, A350s, is an important advance and an excellent signal in the current context,” Macron said during a joint press conference with his Chinese counterpart at the Elysée Palace. 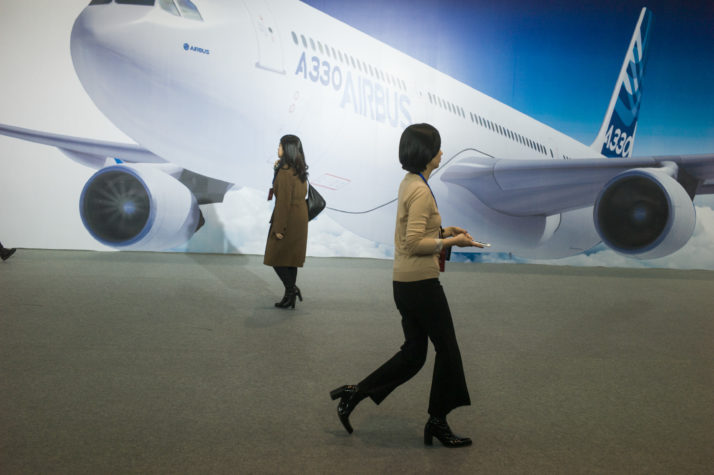 An Airbus facility in Tianjin | Fred Dufour/AFP via Getty Images

Picking up on the geopolitical implications of the deal, Xi noted that “a united and prosperous Europe corresponds to our vision of a multipolar world.” According to newspaper Ouest-France, he added that “China will always support the integration of Europe and its development,” and insisted that Europe is “a major pole.”

Trying to play down any risk of rival models clashing in a region where both Paris and Beijing are trying to push their influence, Macron said: “In Africa we are not strategic rivals but we can be better long-term partners in the fields of security, education, infrastructure and development.”

BNP Paribas, Eurazéo and the China Investment Corporation signed a memorandum of understanding to set up a Franco-Chinese cooperation fund, targeting €1 billion. BNP Paribas also signed a memorandum on co-financing with the Bank of China that could, according to the Elysée, reach almost €6 billion in the next three years.Read More – Source