Policymakers on both sides of the Atlantic are threatening to dismantle laws that have allowed online giants like Google, Facebook and Twitter to flourish — a change that could force them to take a heavy hand in policing what their billions of users see on the internet.

In Washington and Brussels, a series of two-decade-old legal provisions dating to the webs early days allow internet companies to host content posted by users without being legally responsible for it. Thanks to that immunity, U.S. companies have built massive profit engines around material such as Facebook posts, Instagram photos and YouTube videos, without having to screen them ahead of time.

But now lawmakers and regulators in the U.S. and European Union are starting to chip away at those protections, driven by growing concern about hoaxes, hate speech and other online bad behavior.

In April, President Donald Trump signed a law holding online companies liable for “knowingly” hosting content that enables sex trafficking. Both Democrats and Republicans in Congress are talking about carving out a similar exception for illegal opioid sales.

In Brussels, meanwhile, the European Commission recently introduced a bill that would require sites like Facebook to take down terrorist content — Islamic State videos, for example — within an hour of being flagged by authorities, or face still-unspecified penalties. The move follows updates to EU copyright and audiovisual media laws that require platforms like YouTube and Amazon to more actively monitor for violations, including online copyright infringements and inappropriate ad placements.

“You dont use the sword, theres going to be powerful interests that are going to say, Heres the opportunity for us to lead an effort in the Congress to take away the shield'” — U.S. Senator Ron Wyden

The growing legal risks could force Google, Facebook and Twitter to take a far more active role in managing the content that flows through their platforms — a mammoth task given the vast numbers of tweets, snaps, blog posts, ads and other material involved. Google-owned YouTube alone posts 400 hours of user-uploaded videos each minute, and the company boasted last year that its users watch a billion hours worth every day.

Senator Ron Wyden (D-Ore.), who helped write Americas tech liability provision in the 1990s, warned that the internet as we know it would cease to exist if the industrys legal protections disappear.

“If websites, ISPs, text message services, video game companies and any other type of platform were held liable for every word and deed they facilitated or somehow enabled, the entire system would shut down,” Wyden told POLITICO. Without the U.S. law, “collaboration and communication on the internet would simply cease,” he said.

But the tech industrys once-golden reputation has taken hits amid a series of damaging revelations, including Russias manipulation of social media and Facebooks Cambridge Analytica data scandal. And even tech allies like Wyden concede that if the internet giants dont do a better job of cleaning up their services, their favorable legal status is in jeopardy. 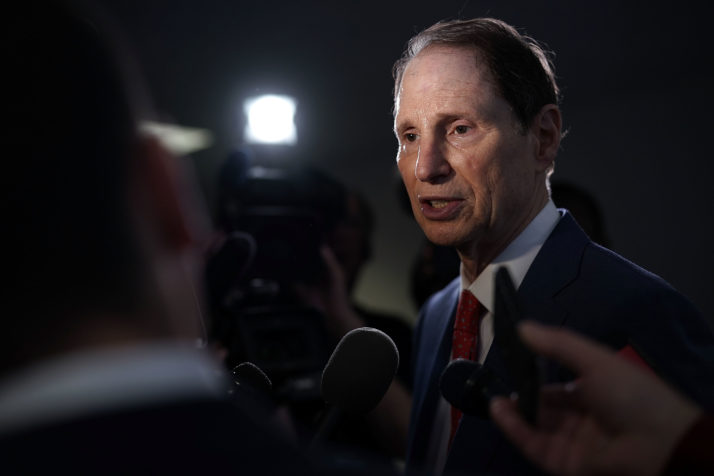 U.S. Senator Ron Wyden warns that dismantling the existing legal protections would effectively dismantle the internet as we know it | Alex Wong/Getty Images

“You dont use the sword, theres going to be powerful interests that are going to say, Heres the opportunity for us to lead an effort in the Congress to take away the shield,'” he said.

Efforts to revamp the laws underpinning tech platforms are still at an early stage and could still be derailed. But the fact that officials on both sides of the Atlantic are taking aim at the provisions — Section 230 of the Communications Decency Act in the U.S. and the EUs E-commerce Directive — shows how much attitudes toward the major tech companies have shifted in the past few years.

In the early years of the World Wide Web, as millions of ordinary people began flocking to the internet, U.S. and European policymakers saw a need to protect young online companies from lawsuits that could drive them out of business. Section 230 dates back to 1996, while the E-commerce Directive followed in 2000.

But the landscape has changed dramatically since then. The number of internet users has exploded, reaching an estimated 3.6 billion worldwide in 2018, according to eMarketer, a digital market research firm. And giant companies like Google and Facebook — which didnt even exist when the U.S. law came into force — now dominate the advertising-driven online economy.

Politicians on both the left and right spent years lauding the tech industry and its innovative spirit. But today, many are beginning to ask why these companies, which play such a central role in society and daily life, shouldnt be regulated like, say, broadcasters or utilities. Former White House strategist Steve Bannon is among those who have called for utility-style oversight of Facebook and Google.

U.S. lawmakers kicked off the effort this year with their anti-sex trafficking bill, H.R. 1865 (115), which drew broad bipartisan support as Congress overrode tech companies resistance to any tinkering with the immunity provision.

Around the same time, the EU followed with its terrorist, copyright and media provisions. Its a sign that European lawmakers, frustrated that tech companies arent moving fast enough to address their concerns, are shifting from away from an old reliance on non-binding recommendations.

The pressure is likely to grow in the coming months, as political leaders see an upside to going after tech companies and the legal foundations on which they rest.

On the American side, the issue has gotten caught up in the 2018 midterm elections. Republicans, who have increasingly accused Google, Facebook and Twitter of being biased against conservative views, repeatedly questioned Facebook CEO Mark Zuckerberg and other tech executives at congressional hearings about why they still deserve Section 230 protections. Trump has joined the complaints, accusing Google of rigging its search results against him and “controlling what we can & cannot see.” 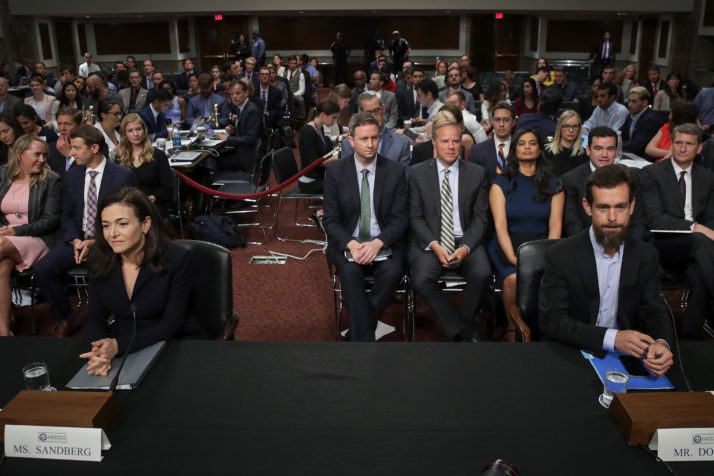 And members of both parties have raised the idea of weakening Section 230 further by making internet companies responsible for the illegal sale of opioid drugs on their platforms.

“Do you all feel any responsibility?” Senator Joe Manchin (D-W.Va.), whose state has been hit hard by opioid abuse, asked Facebook Chief Operating Officer Sheryl Sandberg and Twitter CEO Jack Dorsey during a Senate hearing last month. “A lot of people have been affected and a lot of people have died receiving information about how to obtain drugs through yalls platforms.”

In Europe, France and Britain are calling for a full reopening of the E-commerce Directive to crack down on the spread of hate, racism and disinformation.

Early this year, France proposed legislation to curb the spread of hoaxes and fake news, in the wake of Russian meddling in the 2017 French presidential election. And last month, French Prime Minister Edouard Philippe unveiled a measure to penalize platforms that dont do enough to stem the spread of hate speech and racism. He said hate is spreading in online spaces “with impunity” and argued that the only solution is tighter time limits for companies to take down material — with sanctions for inaction.

“Public opinion is so poor that people are ready to discuss, to take action,” Frances digital secretary, Mounir Mahjoubi, told POLITICO in an earlier interview. “Because of this public opinion, we cant sit around without reacting. If not, the government will seem weak on this subject and we could endanger the situation even further.”

British Prime Minister Theresa Mays government has expressed similar frustrations, saying its “assessing legislative options to modify the online liability regime in the U.K.,” including changes that “may be possible when we leave the EU.” The implication is that Britain could go further than Brussels in setting up strict new rules once its left the bloc as part of Brexit.

Its an opportunity “to write a set of laws that are absolutely right for the modern times,” said former U.K. Digital Secretary Matt Hancock.

The industry has pushed back hard on multiple fronts.

In Congress, the biggest tech brands and their trade groups and allies have furiously lobbied to keep Section 230 intact, fearing that the sex trafficking bill opened the door to further erosion of the law. Google, Facebook and Twitter, which collectively spend millions of dollars on influence campaigns in Washington, all listed the legal shield as a priority in their most recent lobbying disclosure forms.

Twitter CEO Jack Dorsey argued that eliminating Section 230 would erase the limited liability it gives companies that make good-faith attempts to police their platforms. As a result, he said, companies like his would be forced to take a more hands-off approach to what users publish. 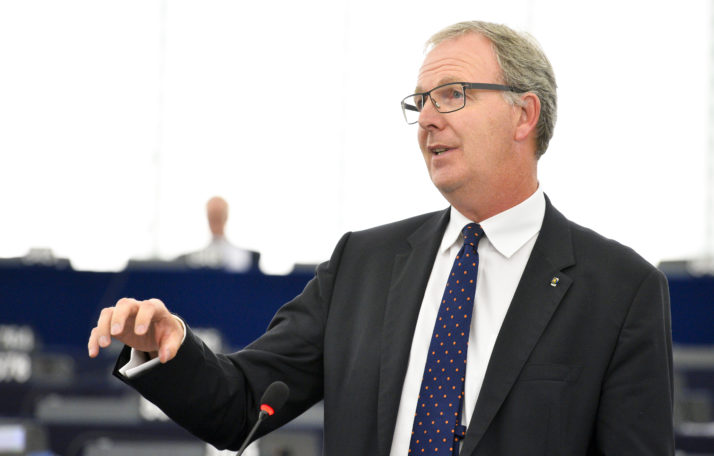 “If we didnt have that protection, we would not be able to do anything around harassment or to improve the safety or health of the conversation around the platform,” Dorsey told POLITICO the day before he faced a round of congressional hearings last month.

The tech industry scored a victory on this front in the new trade agreement among the U.S., Mexico and Canada, which includes a Section 230-like provision that could expand the tech industrys legal immunity across North America. The pact, however, outlines exceptions “necessary to protect public morals,” citing the U.S. anti-trafficking bill as an example. The agreement still requires congressional approval.

In Europe, the prelude to the European Parliaments vote on the copyright changes saw one of the biggest lobbying campaigns Brussels has ever seen, backed by internet companies like Google and Mozilla.

Members of the European Parliament were bombarded with thousands of automated emails urging them to vote down parts of the copyright proposal, while tech lobbying groups circulated petitions with hundreds of thousands of signatures. The lobby group EDiMA, which represents internet giants like Google, Twitter and Facebook, hired cars with massive posters pasted on them in Brussels, encouraging lawmakers to vote down the changes.

The public pressure annoyed some lawmakers.

“You shouldnt spread this fake news — then this is it: fake news,” said Axel Voss, the European Parliaments lead negotiator on the copyright changes, in response to one online campaign. “Instead of spreading this ideological nonsense it would be nice to deal with valid arguments.”

Read this next: 5 things to watch in Bavarias election

EU warns big tech platforms to do more against disinformation