WASHINGTON — The Trump administration is siding with Russia in a potential landmark case over an issue that threatens to tear the World Trade Organization apart: What actions can countries take in the name of national security, even if it violates their WTO commitments?

The panels decision, expected later this year, could be consequential for a number of cases brought against the U.S. over President Donald Trumps use of steel and aluminum tariffs.

However, the case involving Russia stems from a different type of action — namely, transit restrictions that Moscow imposed on Ukraine in January 2016 that cut off key markets in Central Asia and the Caucuses, which Ukrainian exporters can only reach by Russian roads. The move came amid continuing conflict between the two nations over Russias annexation of Crimea in March 2014 and a war in eastern Ukraine thats now in its fifth year.

Although the U.S. backs Ukraine in the larger territorial conflict, both the U.S. and Russia argue the WTO has no right to weigh in on the case Ukraine brought against the transit restrictions.

Thats because Moscow says it imposed its restrictions as a national security measure under Article 21 of the General Agreement on Tariffs and Trade, which allows members to take actions that violate their WTO commitments for purposes of national security.

The U.S. government argues that “the dispute involving essential security is political in nature and, therefore, beyond the proper authority and competency of the WTO to assess.”

Its the same argument the Trump administration is using to justify its steel and aluminum tariffs. Both Washington and Moscow insist Article 21 claims are “non-justiciable” — meaning WTO panels cant rule on any dispute invoking the national security exemption.

In the other words, they argue “as soon as anybody says the word Article 21 out loud, the panel has to stop and go home,” Jennifer Hillman, a former WTO Appellate Body judge, said in a recent speech.

The Office of the U.S. Trade Representative declined to comment, but directed to POLITICO to documents on its website explaining its position in the Russia-Ukraine dispute.

“A dispute involving essential security is political in nature and, therefore, beyond the proper authority and competency of the WTO to assess,” the U.S. government said during an oral presentation on the case earlier this year. “The panel should fulfill its function by noting the invocation of Article 21(b)(iii) in its report to the [WTO Dispute Settlement Body] and make no other findings.”

Some other WTO members, such as Canada, believe countries should at least be required to say why theyre invoking Article 21. However, Russia and the U.S. counter that the provision is “self-judging” — that is, once a country decides an action is in its national security interests, it doesnt have to explain the decision to other members.

Trumps steel and aluminum tariffs come closest to a safeguard action, but that would require the U.S. to compensate other WTO members for lost trade, something Trump didnt want to do.

“The text of Article 21 contains no requirement for a member to detail reasons or events to invoke the security exception. The text instead provides only that a member considers the action necessary for the protection of its essential security interests in time of war or other emergency in international relations,” the U.S. said in another legal brief in the case.

However, Hillman contends the provision isnt as broad as the Trump administration argues, since the text indicates it can only be used in situations involving nuclear weapon materials; trade in implements of war or goods to supply a military establishment; or in the time of war or some “other emergency in international relations.”

In Russias case, the country has been reluctant to admit any military role in Ukraine, so identifying the reason for its national security exception could be awkward for Moscow, she said.

Trump imposed duties on steel and aluminum in March following a pair of investigations that found imports of the two metals threatened to impair national security by weakening the U.S. economy. A rarely used U.S. law known as Section 232 of the 1962 Trade Expansion Act allows the president to restrict imports in the case of a national security threat, but most commanders in chief have been loathe to use the authority.

Countries responded to Trumps trade restrictions both by retaliating against U.S. exports and by challenging the move at the WTO, accusing the U.S. of imposing an illegal trade barrier.

Under WTO rules, countries that want to impose additional duties on imports can do so through a temporary “safeguard” action; through countervailing and anti-dumping duty proceedings; or through negotiations with other WTO members. Trumps steel and aluminum tariffs come closest to a safeguard action, but that would require the U.S. to compensate other WTO members for lost trade, something Trump didnt want to do.

While the EU, China, Canada, Mexico and others believe the tariffs are illegal, the U.S. makes the same charge against countries that have retaliated.

“Instead of working with us to address a common problem [of global steel and aluminum excess capacity], some of our trading partners have elected to respond with retaliatory tariffs designed to punish American workers, farmers and companies,” U.S. Trade Representative Robert Lighthizer said in statement announcing WTO cases against five trading partners. “These tariffs appear to breach each WTO members commitments under the WTO agreement.”

Lighthizer repeated that sentiment Thursday during a Senate Appropriations subcommittee hearing, where he was challenged to explain how steel and aluminum exports from a longtime ally like Canada pose a threat to national security.

“Nobodys declaring war on Canada, or saying theyre an unfriendly neighbor. Theyre obviously not,” Lighthizer replied. “Theyre a great ally and certainly one of Americas closest friends and closest trading partners. But if you decide that you need to protect an industry, you cant be in a position where the protection is of no value because everything comes in … from Canada.” 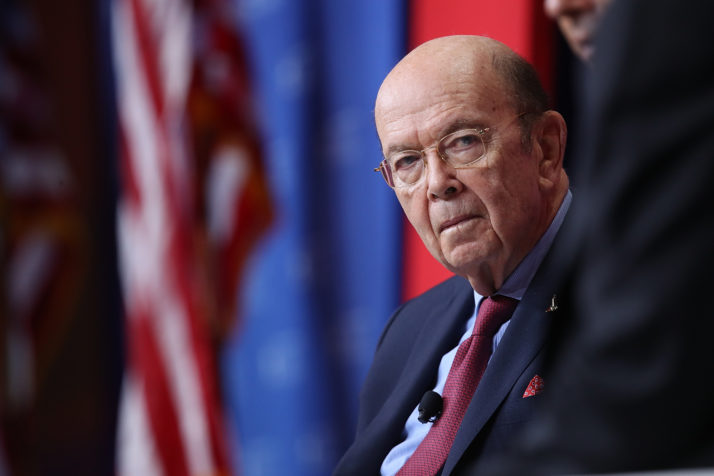 U.S. Commerce Secretary Wilbur Ross to continue the Section 232 auto investigation to keep the option of additional restrictions on the table

That doesnt mean the countries themselves are a national security threat, just their exports, he explained, adding that once the U.S. has decided to restrict imports, it has to ensure theres “no hole in the net” that defeats the purpose of the original action. Still, many close allies are offended by the Trump administrations use of the national security argument to keep out their products.

“This goes against all logic and against all history. We simply cannot accept this,” European Commission President Jean-Claude Juncker said Wednesday, just hours after he and Trump agreed to launch negotiations to reduce trade barriers across the Atlantic. Those talks could lead to removal of the steel and aluminum tariffs and Europes retaliatory duties on $3.3 billion of American exports.

But still looming is another probe into whether auto and auto part imports, including from Europe, pose a risk to U.S. national security.

Although Trump agreed to hold off on imposing new tariffs on the EU as long as negotiations are making progress, hes directed Commerce Secretary Wilbur Ross to continue the Section 232 auto investigation to keep the option of additional restrictions on the table.

In the meantime, the cases that China, the EU and others have brought against the U.S. steel and aluminum tariffs are proceeding at the WTO, as well as the more recent cases brought by the U.S. against the retaliatory tariffs.

A narrow ruling that restricts the right of WTO members to use the exception could reinforce Trumps perception.

If WTO judges get over the first hurdle and decide they can rule in cases invoking Article 21, theres a fear they could either decide the case too narrowly or too broadly, a senior European official said last week.

A narrow ruling that restricts the right of WTO members to use the exception could reinforce Trumps perception that the rules-based global trading is unfairly tilted against the U.S. and encourage him to disregard its decisions.

A broad ruling, meanwhile, could open the door for countries to use the national security exception every time they want to unilaterally raise duties or take some other action in contravention of their WTO obligations.

The second possibility presents a particularly interesting situation, where countries could potentially invoke the “self-judging” Article 21 exception to justify their retaliatory duties on the U.S.

Read this next: Viktor Orbán: Commission is EU elite failure

Theresa May: Now EU must get serious in Brexit talks

I agree with the chancellor. German leadership hopeful sees no need to change course