The Chechen parliament has unanimously voted to prepare and draft a constitutional amendment that would allow the same person to remain President of the Russian Federation for three consecutive terms instead of the current two.

The parliament of the Chechen Republic decided to draft the legislative initiative allowing one person to remain as Russian president for three terms in a row and also forwarded the bill to the Russian government and the Supreme Court for expert review, reads the statement posted on the Chechen parliaments website.

Vladimir Putins press secretary Dmitry Peskov told reporters on Friday that the president did not have the issue of changing the constitutional law on the presidency on his agenda and added that the Russian leader had repeatedly expressed his negative position over changes to the constitution.

In one of the most recent statements, done in an interview with the NBC television in March this year Putin said that he had never changed the constitution and had no intention to do this in future.

At the same time some federal lawmakers have already voiced cautious support for the Chechen parliaments proposal. Deputy head of Fair Russia caucus, MP Mikhail Yemelyanov, told Interfax that his party colleagues also think that the limit on two consecutive presidential terms should be lifted. 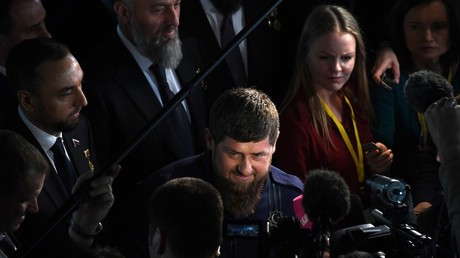 In mid-April this year the head of the Chechen Republic, Ramzan Kadyrov, called for changes to the Russian Constitution that would allow Vladimir Putin to be re-elected president after his current term expires in 2024.

“As long as our incumbent president is in good health we must not think about any other head of state. This is my personal opinion and I am not changing it. Right now there is no alternative to Putin,” Kadyrov was quoted as saying by Interfax. He added that this could be done through a nationwide referendum and that in his opinion there was no need to ask for Putins consent over the issue.

The Chechen leader noted that many other nations do well without this type of restriction. “Why can China do this and Germany can do this, but not us? If this is in the peoples interest, why cant we make changes to the law?” he said.

Currently, the Russian constitution allows the same person to run for the presidency for an unlimited number of terms on one condition – there can be no more than two consecutive terms. In 1998, the issue was brought before the Russian Constitutional Court, which ruled that the third and fourth terms would be legal if there is a break between the second and third terms. This was why Putin could not run for president in 2008 after winning in 2000 and 2004. In 2012, the condition regarding consecutive terms was not applicable, so Putin ran again and won.

Rep. Ross Spano Under Investigation by DOJ Over Campaign Finances