Rosneft CEO Igor Sechin has testified as a witness at a closed trial into an appeal filed by former Russian Economy Minister Aleksey Ulyukayev, who was sentenced to eight years in prison for receiving a $2 million bribe.

The Tuesday testimony was Sechins first personal appearance in court as part of Ulyukayevs case. He turned down a court summons several times in 2017 during the initial trial, citing his busy schedule and foreign business trips as the reason for the decision. Back then, Sechin asked his attorneys to present the testimony he had given to investigators before the start of the hearings and confirmed that his position had not changed.

The defense argued that Sechin was dodging a personal appearance and violating due process, while critics accused him of being arrogant and considering his position to be above the law. The issue was even raised at an annual Q&A session with President Vladimir Putin, but the Russian leader refused to criticize Sechins behavior.

Sechins Tuesday testimony was closed to the press at the demand of prosecutors, who said that an open process could lead to leakage of commercial secrets belonging to the Bashneft oil company, the privatization of which was behind the initial trial. Prosecutors confirmed, however, that the court was looking into the purchase of Bashneft stock by Rosneft – the deal which, according to investigators, required Ulyukayevs approval and for which the ex-minister demanded a $2 million bribe.

On Thursday, Sechin said that he made a personal visit to the court as soon as he had the opportunity and added that he always felt personal responsibility for fighting corruption.

“I hoped that the first instance court would accept my written testimony, but unfortunately this has not happened. This is why I personally came to the court as soon as I had the opportunity to do this. This is a matter of principle for me, I want my testimony to be taken into account. I am the main witness, this is a matter of honor to me,” the Rosneft CEO was quoted as saying by TASS.

After the testimony was delivered, Ulyukayevs defense team announced that the information disclosed would force them into changing their position in the process, but did not elaborate. Defense attorneys also asked for the court session to be adjourned until Monday to allow more time for preparation, although this request was refused.

When journalists asked presidential press secretary Dmitry Peskov to comment on Sechins appearance in court, the official answered that the issue “had no relation to the Kremlin.” He added that he possessed no information about the court process and could not answer questions about it.

Former Russian Economy Minister Ulyukayev was detained in November 2016 on charges of receiving a $2 million bribe in return for his ministrys support for a deal that would allow state oil company Rosneft to purchase the governments stake in another Russian oil giant, Bashneft. 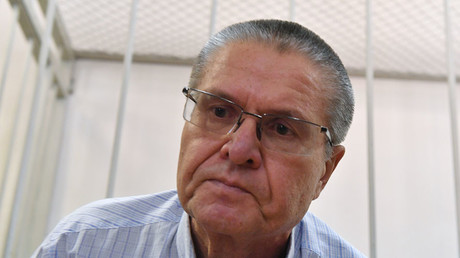 The charges were based on testimony from Rosneft CEO Sechin, as well as evidence of a sting operation, in which Sechin personally handed a bag with marked dollar bills to Ulyukayev. The court concluded that “Ulyukayev acted under a preconceived plan, motivated by personal gain and with full understanding that the process of the privatization of Bashneft depended on his decisions,” and sentenced the ex-minister to eight years in prison as well as a fine of over $2.2 million.

Ulyukayev pleaded not guilty at the start of the trial and continues to maintain his innocence, claiming that the incident was “a monstrous provocation” set up by Sechin and his allies in the security services. The defense team has filed an appeal seeking full acquittal, but has not presented any new materials in the case, insisting that the court reconsider its ruling on the basis of the existing testimonies and records.

Ulyukayev also asked the court to allow his wife, Yulia Khryapina, to act as his defender in the appeals trial, but the request was denied as Khryapina is not a certified lawyer and has not studied the documents in the case.