US diplomats and staff of various American organizations will not be allowed to monitor the upcoming Russian presidential election, in reply to a similar ban issued by the US in 2016, the Russian deputy foreign minister has said.

“As for the American diplomats and workers of the offices of various US organizations in Russia, they will not be permitted to participate in this process [poll monitoring], considering the fact that during the 2016 elections in the US the staff of Russian organizations in the US were denied such an opportunity,” Sergey Ryabkov was quoted as saying on Thursday by Interfax.

The deputy minister also added that this would not apply to US citizens who work for the monitoring mission of the OSCE’s Office for Democratic Institutions and Human Rights.

In December 2017, Ryabkov told reporters that Russia had officially informed the US Department of State that, after considering the refusal to accept monitors from Russian diplomatic offices in the US, Moscow had decided to take reciprocal measures. 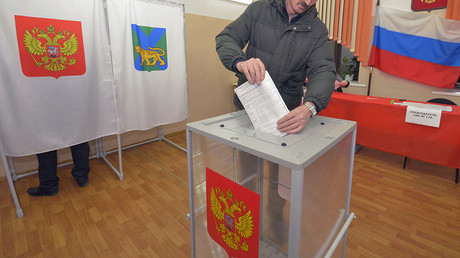 The Russian presidential election is scheduled for March 18. Eight candidates are taking part, including incumbent President Vladimir Putin, who is currently leading the popularity ratings by a wide margin. According to a study conducted by the state-run All-Russian Public Opinion Research Center (VTSIOM) in mid-February, 69.5 percent of voters said they would support Putin if the election was held on the nearest weekend. Communist candidate Pavel Grudinin was second with 7.5 percent, Vladimir Zhirinovsky of the populist nationalist party LDPR was third with 5.3 percent, and Grigory Yavlinsky of the liberal party Yabloko came in fourth with 1.4 percent. Other contenders can count on the support of less than 1 percent of voters, according to the research.

After June 2 Primary Results, Democrats and Republicans to Compete for 8 Congressional Seats

Grassley to Return as Chairman of Senate Judiciary Committee After 2020 Election: Graham