If it was an underwhelming experience for France’s king of the gods he was too polite to let it show as he glided through his first Franco-British summit as president with the permanent smile of a Gallic Tony Blair at the height of his powers.

In his pocket, French President Emmanuel Macron had secured £44 million of British cash to ease the pressure at Calais of dealing with migrants hoping to cross the Channel. He had also secured a new treaty to meet his campaign pledge to overhaul the controversial 2003 Le Touquet agreement, which moved the British border to French soil.

Macron had also won British military support for the French engagement in Mali — a commitment seen as long overdue in Paris.

In return, Theresa May secured a giant tapestry depicting the successful French invasion of Britain. On loan.

The contrast, admittedly, is too trite. The French president agreed to send some of his troops to Estonia, where British forces have been placed to deter a Russian invasion. And his Calais victory amounts to little in reality — the status quo remains and U.K. border guards can still operate at the French port.

Nevertheless, this was a meeting in which the balance of power between the two countries’ leaders plainly has shifted.

Macron is safely ensconced in the Elysée Palace until 2022 and has his sights set on European dominance, eclipsing Angela Merkel’s fading star.

For May, 2022 is little more than a pipe dream. Not impossible, but unlikely, according to most of her parliamentary colleagues still smarting from last year’s general election humiliation.

For the odd couple, their day began, somewhat incongruously, in the pub — a place neither leader is likely to frequent often.

May’s predecessor David Cameron had tried a similar trick with François Hollande at the last U.K.-France summit in 2014. Back then it was the French leader down on his luck, uncomfortable in the spotlight. Fast forward four years and the things have changed.

At the Royal Oak just outside Maidenhead in Berkshire it was the French president who looked more at home, as May awkwardly shuffled around him while he chatted with the French staff brought out to say bonjour.

The encounter was captured by the president’s staff, filming his every move on a mobile phone and posting the footage to his 2.65 million followers on Twitter. May is not so much analog in a digital age as email in a world of Facebook.

Greeting the two members of staff, Macron began to chat in French before moving into English for the prime minister.

The staff are from Rodez, they told him. Ah, the town of Soulages, he replied. It was a very Macron kind of answer. Artist Pierre Soulages, French colleagues report, is “the master of black monochrome.” Macron has been to the town twice. He also went bowling there.

For lunch, prepared by one Craig Johnston — the 2017 winner of TV show “MasterChef: The Professionals” — the leaders were treated to “dressed crab, blood orange, radicchio and sorrel” for a starter, followed by “carver duck breast, roasted onion tartlet and beetroot purée” for their main course. Two wines were served to accompany the courses — both French. One a Riesling and a 2013 Domaine Grand Romane.

“We are making a new tapestry together” — Emmanuel Macron

The Michelin starred gastropub (owned by the former chat show star Michael Parkinson) is not your ordinary Dog & Duck, but may nevertheless have raised the president’s eyebrows. Elsewhere on the menu were a chorizo muffin, a haddock hash brown and a scotch egg.

From the pub to the military academy at Sandhurst, 25 minutes away by car.

May, dressed in a black coat with black leather gloves accompanied her guest on foot up the walkway toward the parade ground where British troops were on guard to greet them.

After a family photo in the freezing cold — with veteran French Foreign Minister Jean-Yves Le Drian sporting a bold silver puffa jacket to stay warm — the leaders sat down for the business of the day.

Shortly after 6 p.m. May and Macron, with Boris Johnson and other ministers looking on from the front row, emerged for the press conference to wrap things up.

As is customary, May went first, but most of the audience — British and French alike — were keener to hear what the new(ish) alpha male of European politics had to say. 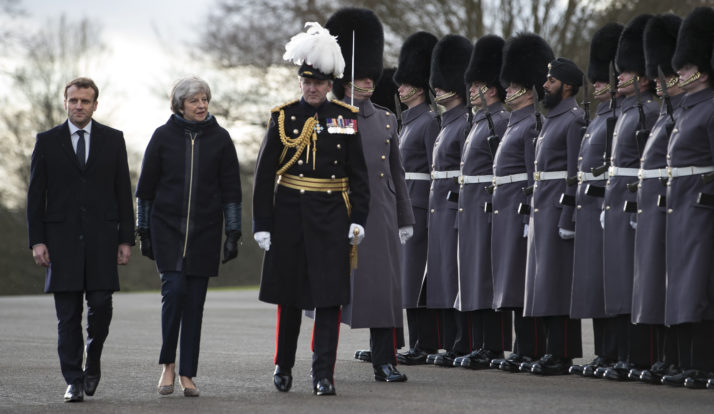 May was asked whether she had accepted a bad deal for Britain, paying more money and accepting more migrants with little in return. Macron was asked whether his loan of the Bayeux tapestry was a sop to win the Brits back and whether Brexit had stripped his opposite number of her influence.

No, no, he insisted. “We are making a new tapestry together.” Too smooth. Not even Blair would’ve tried that line, surely, nor dared to wink at his opposite number from the lectern, as Macron did after his opening remarks.

For all the staged chumminess, this is an entente born of relative mutual weakness as both sides are unable to support their military and foreign policy ambitions alone any longer.

It is also one that is yet to go much further than defense, regardless of the cultural and economic claims made by each side in Sandhurst.

The éléphant dans la pièce as ever was Brexit, upon which the two sides not only disagree but have conflicting interests. For Paris, there are spoils to be won.

For all the political theater the relationship continues to be built — perhaps more so now than before — on simple power and self-interest.

The goodwill in Berkshire will have little bearing on Brexit, one suspects.