The left-leaning front-runner in Mexico’s presidential race is overtly nationalistic, pushes “Mexican people first” policies and peppers his speeches with anti-establishment slogans that thrill the working-class Mexicans who flock to his rallies.

But while his style might be distinctly Trumpian, his policy prescriptions could not be more different. Indeed, the election of the former mayor of Mexico City could be disastrous for Trump and his administration, creating an even more charged relationship between the two countries that could reduce cooperation on border security, trade and immigration.

That worries U.S. politicians and business leaders, including House Homeland Security Chairman Michael McCaul, who was not shy about expressing his disdain for López Obrador at an event last fall hosted by the U.S.-Mexico Chamber of Commerce. 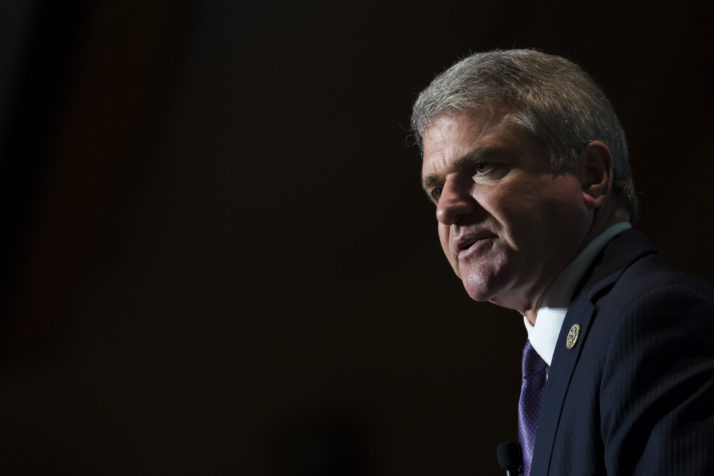 “I do not want to see President [López] Obrador take office next year,” McCaul said, adding he fears the Trump administration could increase those chances if it mishandles talks on revamping the 24-year-old North American Free Trade Agreement with Mexico and Canada.

McCaul and others fret that Trump himself could help put López Obrador over the top by following through on his threat to pull out of NAFTA — a development likely to produce more voter frustration that López Obrador could capitalize on.

“It worries me if NAFTA is not done correctly that we’ll be handing a candidate, a socialist candidate like that, the presidency of Mexico,” the Texas Republican said. “And I think that would be the biggest mistake we could possibly do.”

Right now, negotiators for the three nations are striving to reach a deal by the end of March, motivated by the desire to avoid the having every detail of the talks become a political weapon during the last weeks of Mexico’s presidential campaign. And regardless of whether a new NAFTA agreement is negotiated before the July 1 election, the next Mexican president will set the tone for the next years of U.S.-Mexico relations.

López Obrador, 64, who goes by the nickname AMLO, has made his biggest headlines in the U.S. by being a fiery opponent of Trump’s critical rhetoric about Mexico. But Trump still has the opportunity to smooth over the bad feelings, U.S.-Mexico experts say.

“I say it’s more in Trump’s hands as to what happens with the relationship, than it is in Mexican hands. … Because I think there’s a predisposition to want to strengthen and improve the relationship with the United States,” Jim Jones, former U.S. ambassador to Mexico in the Clinton administration, told POLITICO. “But if they are so insulted and denigrated, the Mexican people will react and the Mexican politicians will react in favor of the Mexican voters.”

That focus on maintaining better ties with the U.S. came through in the recently released 2018-24 platform from López Obrador’s Morena party, which rather unexpectedly praised NAFTA as “a demonstrated useful instrument for the development of economic and commercial relations with the U.S. and Canada.”

“He certainly hasn’t been a champion or enthusiast for NAFTA, but eliminating it is not a politically smart way to proceed as well, and he knows that,” said Michael Shifter, president of Inter-American Dialogue, adding that López Obrador often has emphasized social development and protecting poor people in regards to NAFTA.

The Morena party platform recognizes that the trade pact has benefited the auto and electronics industries, but argues it has left out small- and medium-size businesses, which make up the majority of the Mexican private sector, from supply chains.

NAFTA has indeed helped shape Mexico’s economy. Trade has increased rapidly, as the share of exports in Mexico’s GDP jumped from 8.5 percent in 1993, before the treaty went into effect, to about 37 percent in 2013, according to Mexico’s National Institute of Statistics and Geography. Mexico’s GDP growth rate, however, has fluctuated significantly since the trade deal was enacted, and only in recent years has been at a consistent 2 to 2.5 percent, according to World Bank figures.

Still, López Obrador and members of Morena have been vocal about expanding their trade partnerships with countries like China — a stance largely is in line with the priorities of current Mexican President Enrique Peña Nieto.

Political scientists credit AMLO’s rise this election cycle mostly to his attacks on Mexico’s political class and its ineffectual leadership. His third candidacy comes amid growing outcry against state corruption and dissatisfaction with Peña Nieto’s administration and his Institutional Revolutionary Party, known in Spanish by the acronym PRI, as violence and corruption have escalated. Labor rights advocates say that although Mexico’s economy has expanded in the past 20 years, wages are still low and the working class has little upward mobility.

“The anger against the political class is much stronger now than it was in previous elections,” Shifter said. When Peña Nieto was elected, there was hope the PRI party “would be transformed. There’s been widespread disappointment and [López Obrador] has been able to capitalize on that.” 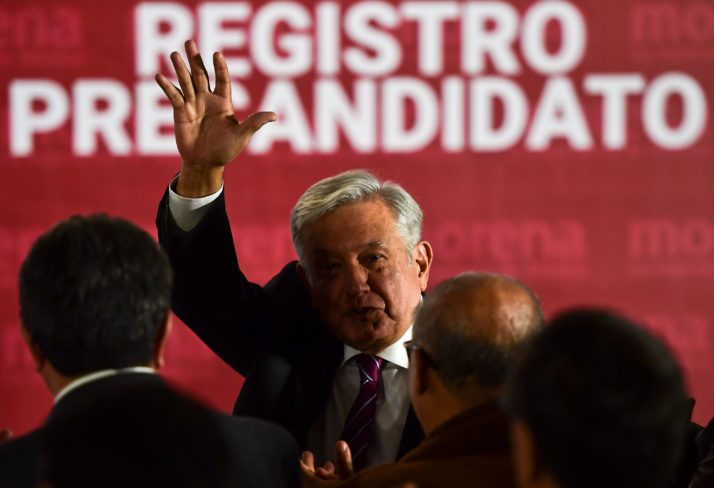 Andres Manuel Lopez Obrador, leader of the Morena party, waves after registering himself as a pre-candidate for Mexico’s presidential election in July, in Mexico City, on December 12, 2017 | Ronaldo Schemidt/AFP via Getty Images

AMLO also has the advantage of not needing to sway a majority of Mexican voters. The next president may win with just a plurality of votes because of many third-party candidates. That makes it possible that the next Mexican president could be win with under 30 percent of the vote because Mexico has no runoff system.

Public sentiment supports López Obrador’s push against corruption. He calls the “fight against the mafia of power” the central theme of his campaign.

Only 17 percent of Mexicans trust Peña Nieto’s administration, according to a 2017 survey by public research nonprofit Latinobarómetro. Nine out of 10 Mexicans believe that the government does not work for the good of the people, but only to benefit certain powerful groups, the same survey found.

“The corruption in this country is going to end, and that’s why we have the grand objective of organizing the whole country in making sure that honesty is a way of life and a way of the government,” López Obrador said during his November rally in Mexico City, where supporters repeatedly chanted “President!” and “It’s an honor to be with Obrador” in his presence.

Although recent poll numbers are in López Obrador’s favor, it remains possible that the PRI’s recently named candidate, former Finance Minister José Antonio Meade, could pull out a win. The National Action Party, Mexico’s other major party that held power from 2000 to 2012, is running as part of a “For Mexico in Front” coalition with two center-left parties. The more right-leaning party’s former president, Ricardo Anaya Cortés, is expected to be the coalition’s candidate.

Meade remains an uncontroversial pick as a career official who has led multiple ministries — including energy, foreign affairs, finance and social development — under the administrations of two different political parties.

Meade, who has a Yale University Ph.D. in economics, has also positioned himself as the best equipped to handle the future of the Mexican economy, an argument helped by his time running the finance ministry. This stands in contrast to López Obrador, who has little experience in foreign affairs.

But Meade’s 20-year career under the radar could also serve as a negative, as 70 percent of Mexicans do not know or have an opinion about him, a survey by Mexican newspaper Reforma found last month. López Obrador still leads early polls by double digits, garnering a third of the Mexican vote, while Meade lags behind with 16 percent of the vote in the survey.

“It’s really going to be a test for Meade to see if he’s an effective politician that can get well known in the country,” Shifter said. “But to win Mexico, you’ll have to have the popular punch.”

Doug Palmer contributed to this report.

US ramps up pressure on Berlin over Huawei