DUISBURG, Germany — Chinese clothes and toys, German car parts, French wines and Italian textiles have at least one thing in common — they pass through the enormous cargo terminal in this German city that makes for a crucial hub on China’s new rail Silk Road.

The city of half a million near the confluence of the Rhine and the Ruhr rivers and close to airports, autobahns, railway connections and sea ports has been a trade entrepôt for hundreds of years, and now it’s key to China’s efforts to tie its sprawling factory cities with European consumers.

“Duisburg has become by far the most important hub in Europe for Chinese trains,” said Erich Staake, CEO of the city’s port, chain smoking on a gray morning in his office within the port complex. “Every map you see in China there are two cities illustrated for Germany: Berlin and Duisburg — very often Duisburg is printed a little bit bigger.”

Every week, around 25 Chinese trains pass through the rail terminal, dubbed Duisport, laden with consumer goods from cities like electronics hub Chongqing or Yiwu, where an estimated two-thirds of the world’s Christmas decorations are made.

Some continue on to London or Madrid while others are unloaded in Duisburg. The German city’s 2.1 million-square-meter warehouse complex provides room for logistics companies to stockpile goods for onward distribution.

Chinese transit has helped Duisport make the switch from an inland dispatch center for local trade to a “continental consolidation and distribution hub for Central and Eastern Europe,” said Jacopo Maria Pepe of the German Council on Foreign Relations.

That has helped boost employment in a city that had been hard hit by the downturn in Germany’s steel and coal industries. “In the 1990s and early 2000s, high unemployment rates and deindustrialization hit the city and the port particularly hard,” Pepe said. Staake said that since he took charge in 1998, employment at Duisport has soared from 19,000 to 50,000.

“Since China’s President Xi Jinping visited Duisburg [in 2014], we have seen an increase in the number of Chinese companies settling here,” Ralf Meurer, managing director at consultancy GFW Duisburg, said at an October conference on Chinese investment in the Ruhr region.

The operator of the regular train connecting Duisburg with Yiwu, YXE International Container Train, opened a bureau in the city during the summer in a bid to further increase ties.

“The Duisburg Port is maybe the single most successful story in what Germans call the Strukturwandel — the long, painful and as yet unfinished process of industrial conversion of the Ruhr region from coal and steel to a modern industrial and service-oriented economy,” Pepe said.

The China connection kicked off in earnest in 2011 with Hewlett Packard commissioning a service to shift its laptops to Europe from Chongqing.

It has since grown to become one of China’s premier efforts at cementing its status as the world’s most important trading power at a time when the U.S. is retreating under President Donald Trump.

Germany’s rail titan Deutsche Bahn operates many of the China trains as they run through Europe and estimates that 40,000 containers were transported along the rail Silk Road in 2016, with that set to rise to 100,000 by 2020. That’s still a fraction of maritime transport — where a single big ship can carry about 20,000 containers.

The pitch for the rail line is that it is twice as fast as sending a container by sea, and cheaper than sending cargo by air. It’s aimed at a niche of high-value or time-sensitive goods, things like parts for just-in-time car factories and fashionable clothing that has to make retail deadlines.

China’s estimated $900 billion One Belt, One Road plan will see two chains of infrastructure connect up the world’s second largest economy with Europe. One of the rail routes crosses Central Asia and Russia. The maritime route runs from the South China Sea, up the Red Sea (passing the African nation of Djibouti, where China maintains a military presence) to ports like Piraeus in Greece, now owned by China’s COSCO. 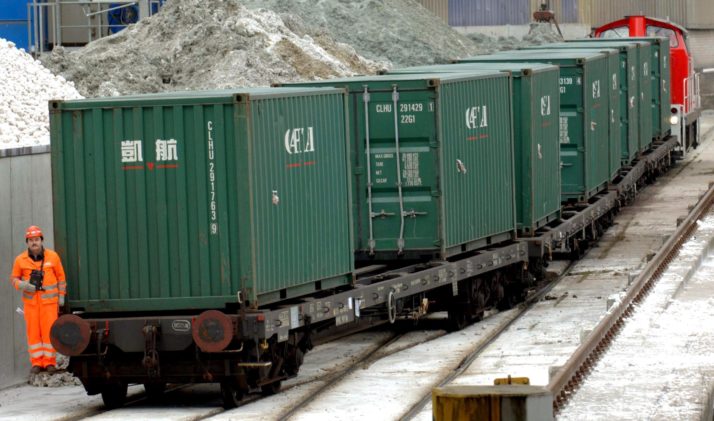 For China, the project is tied to big power politics as it tightens economic and transport links with the countries along the route. For Germany, the new Silk Road promises some lucrative commercial possibilities.

“This is not a gimmick, this is not a symbol,” Staake said. “It is driven by geo-strategic reasons of the Chinese government … to enlarge their influence in other parts of the world. But it offers a lot of opportunities.”

Duisport’s advantage is that it provides a gateway into what has become Europe’s new manufacturing hub — the network of German factories linked to suppliers and assembly plants scattered across Central Europe.

“The manufacturing core of Europe has moved to the east,” Pepe said. “For now, Duisburg is the main continental hub for China. They depend on Duisburg because they do not have any [other] inland distribution hub.”

“We have much more import volume from China than export value to China” — Erich Staake, CEO of Duisburg’s port

Staake is also looking south, in a bid to knit together both the rail and the maritime strands of the One Belt, One Road project. He signed a cooperation agreement with the Port of Trieste on the Italian coast last year.

He is trying to firm up Duisburg’s position, which could be undermined once construction is complete on the China-backed high-speed railway running between Budapest and Belgrade. That will give Beijing another route of access to Central Europe through Piraeus and the Balkans. The project is being probed by the European Commission, which wants to make sure that it does not violate EU public procurement rules.

So far the Silk Road has garnered a lot of publicity, but the business case isn’t yet certain. Trade isn’t a one-way game, and in order for the rail link to make commercial sense it has to work in both directions. But getting enough cargo moving toward China is a persistent problem.

Before 2012, the rail line moved four times more Chinese goods to Europe than went the other way. That’s since been cut to a two-to-one deficit, as high-value consumer goods like French wines, Scotch whisky and Italian textiles head east to sate China’s burgeoning middle class.

“[The Chinese] are still subsidizing the trains,” Staake said. “The reason why is very simple. We have much more import volume from China than export value to China.” 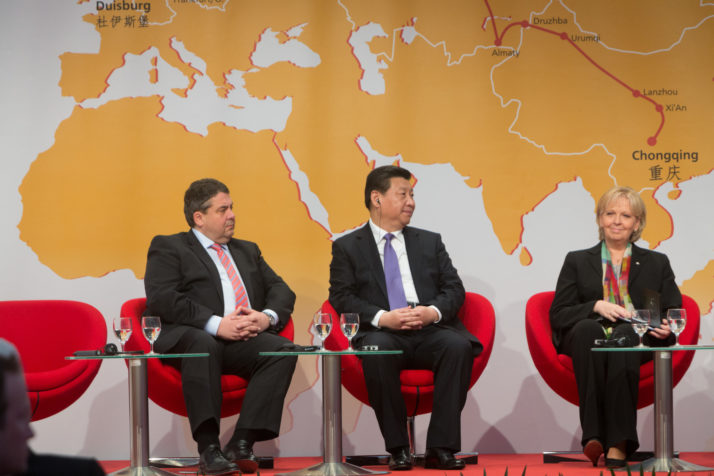 There are chances for the gap to close further, as Chinese customers, burned by tainted food scandals at home, turn to European producers of things like powdered milk. There are also prospects for shifting more automotive parts east and using the railroad for shipping e-commerce goods, Staake said.

But for that to happen, Beijing needs to continue investing in rail links and transport hubs along the whole length of the 12,000-kilometer route. It also has to iron out regulations along a corridor that runs through Kazakhstan, Russia, Belarus and Poland before hitting Germany.

Cutting red tape is crucial both for China and Duisburg. In one example of the costs of paperwork, negotiating passage for a trial Eurasian mail train across the Polish-Belarusian border added a day to transit times, according to the Intergovernmental Organization for International Carriage by Rail.

Despite those kinds of problems, trains are already running a lot faster between China and Europe.

“Chongqing started with 19 days, today it’s 11 days,” Staake said, adding the aim is to get trans-Eurasian transit time down to just seven or eight days.