After the 2009 Green Movement — a failed attempt to overturn a stolen presidential election through street protests — the Iranian political establishment took away one searing lesson: Never lose control of social media. In the days leading up to the election, they blocked Facebook and Twitter, which had helped gain momentum for reformist factions, and in the lead-up to the following 2013 election, throttling internet traffic became the preferred method to ensure that any political excitement remained in check.

But Iranians’ desire to connect with one another never went away, and the government did allow another platform to flourish: Telegram, an instant messaging service tied to people’s phones that allows the easy upload of videos, photos and other files. It’s easy to overstate, as many did in 2009, the impact of technology on mass mobilizations like the Green Movement. Few Iranians had Twitter back then — but that’s how the rest of the world experienced the protests, so the uprising was misleadingly dubbed the world’s first “Twitter revolution.” But now, as thousands of Iranians march against the regime in cities all over the country, chanting radical slogans that would have been unthinkable a decade ago, it’s no exaggeration to say that this time, technology really is playing a central role in allowing people to organize, share information with each other and alert the outside world.

Since 2009, Iranians have become experts at avoiding censorship and circumventing government controls. And Telegram, available outside Iran’s “filternet” and with its high performance at low internet speeds, has become a uniquely potent and ubiquitous agent of communication and information dissemination in the cat-and-mouse game between the people and those trying to control them. It’s easy to store and share large files — like videos — on the platform; it works well with Persian’s left-to-right script; and it offers the ability to develop Persian-language bots and stickers (fun memes and images shared in chats) on top of a simple interface. Unlike Twitter, millions of Iranians use Telegram in their everyday lives — around 40 million monthly users in a country of 45 million overall online users, according to the latest ITU statistics. They often rely on Telegram’s private group chats to stay in touch with friends or family; receive their news from local and diaspora Persian news sources on the platform’s public channels; or subscribe to traffic, weather, shopping or entertainment updates from their neighborhood. (Many Iranians also use Instagram, with an estimated 20 million Iranian users.) So it was no surprise that, after years of allowing Telegram and Instagram to flourish uncensored, the regime began filtering these platforms once the protests gained momentum (“temporarily,” to “maintain the peace,” according to Iran’s state TV).

Millions of Iranians have likely shared subversive information under the false impression that they were doing so in safety.

Iranian authorities have been debating the country’s relatively hands-off approach to Telegram, a globally dispersed company registered in the U.K., since 2015. On several occasions, the Iranian government has announced cooperation with the company, most of which Telegram has later denied. Last July, however, Telegram revealed it had installed Content Delivery Networks, or CDNs, for content on public channels, in Iran. Given how much they rely on the platform, Iranians viewed the news with alarm. In hindsight, it was the beginning of a slippery slope for Telegram’s cooperation with the Iranian government.

Those fears appeared fully justified when Telegram shut down a public channel for AmadNews, a popular news outlet with more than 700,000 followers on the platform, on December 30. Iran’s minister of information communication and technology, Mohammad-Javad Azari Jahromi, requested the platform to censor the channel for “encouraging hateful conduct, use of Molotov cocktails, armed uprising, and social unrest.” Telegram’s cofounder Pavel Durov quickly announced his compliance, citing the platform’s “terms of service” for public channels. 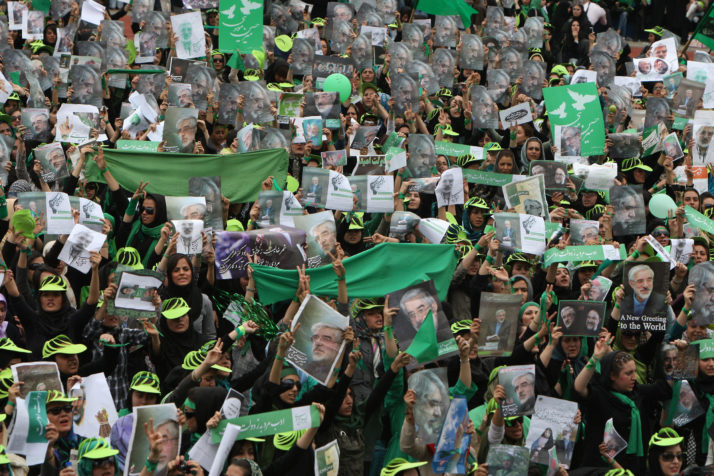 This was a victory for certain political elements within the Iranian system: For months, hard-liners had lobbied Telegram to remove the channel, which claims to speak in the name of the Green Movement with the aim to “expose the corruption of the regime and its clandestine activities.” Some colleagues and I from the Oxford Internet Institute Computational Propaganda Project even noticed bot activity from Iranian Twitter accounts spamming Durov and Telegram’s Twitter accounts, such as this account using the hashtag #Block_AmadNews_channel. The bots began to appear after Amad News disseminated a viral false story about the daughter of Sadegh Amoli Larijani, the powerful head of the judiciary, claiming she was a spy for the British embassy.

Telegram’s move to censor AmadNews has met with swift backlash among digital rights advocates, including the whistleblower Edward Snowden, but the company has shown a concerning lack of transparency about its decision. For instance, when Iranian digital rights activist Nariman Gharib pressed Durov to show how AmadNews had violated Telegram’s terms of service, he failed to provide any clear documentation, saying only that Telegram takes “decisive action.” The activists have a point: The terms of service, at least as documented on Telegram’s FAQ, do not seem to outline the platform’s process on taking down channels. Durov has defended the company’s actions by noting that it refused to comply with another takedown request for the channel “SadaieMardom,” which the administrators of AmadNews had opened to replace the removed original channel.

Telegram’s executives will have an important decision to make: Do they bow to the Iranian government, or do they hold themselves accountable and transparent to their users?

As the protests have gained momentum, Iranian ISPs, infrastructurally central to the command of the Ministry of ICT and the supreme leader, have been putting controls on internet access. Millions of Iranians, depending on the tactics of their provider, have struggled to access mobile data or found themselves disconnected from any foreign web traffic. As of January 1, there have also been reports of home connections receiving disruptions, such as local-only access — spawning fears that the country’s long talked-about National Internet Network, colloquially known as “halal-net,” is finally coming into effect.

When the government is done restricting access, it will likely reexamine its filtering decisions. Minister Jahromi has already announced on Twitter (which has been blocked in Iran since 2009) that those who say the recent censorship of social media platforms is permanent are sowing social unrest.

If the minister stays true to his word, Telegram’s executives will have an important decision to make: Do they bow to the Iranian government’s desire to clamp down on all independent sources of information, or do they hold themselves accountable and transparent to their users, who rely on the platform to communicate freely? Will they develop better, secure tools to allow people to circumvent censorship, or will they collaborate with a system that endeavours to centralize and control the online lives of its users? More than perhaps any technology company in history, Telegram has a unique obligation to the people of Iran at a moment of their extreme peril. Will the company use its power wisely and humanely?

Mahsa Alimardani is an internet researcher focusing on human rights and technology in Iran, working with the U.K.-based freedom of expression NGO ARTICLE19 and a D.Phil. student at the University of Oxford’s Oxford Internet Institute.

Russia and China target US protests on social media