Russia may bar US monitors from its presidential election next year, in response to Washington’s decision not to allow Russian monitors at the US presidential poll last year, a senior Russian diplomat has warned.

“Some time ago we sent an official note to our American colleagues notifying them that, after considering their refusal to accept monitors from Russian diplomatic offices in the United States at the presidential elections that took place in November last year, we are going to act out of the principle of reciprocity,” deputy foreign minister Sergey Ryabkov was quoted as saying on Friday by TASS.

The diplomat added that he personally would not see it as a problem if US citizens arrive at Russian elections as part of such international monitoring missions. “This will be decided as we discuss the international elections monitoring, on equal conditions with other issues,” he said.

Earlier on Friday, Russia’s upper house speaker Valentina Matviyenko told reporters that she expected the number of Russian and international monitors at the March 18 elections to be higher than ever.

“I consider wide participation of monitors, both our own and foreign, to be very important to assure that the appraisals of the election campaign were objective, and its results were legitimate. I am confident that the quantity of monitors will break all records, because the interest in these elections is great,” Matviyenko told reporters.

Also on Friday, Russian Foreign Minister Sergey Lavrov said that the US embassy staff was “constantly meddling” with Russian elections and noted that such actions violated the international convention on diplomatic relations. 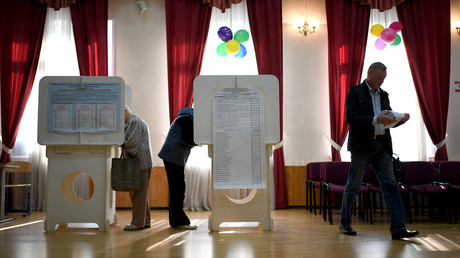 “They are constantly intervening in our elections. Russian President Vladimir Putin has repeatedly given concrete examples of the US embassy doing this, including cases in which US diplomats participated in rallies of [Russian] opposition parties, including the unregistered ones,” Lavrov said in an address to the upper house of parliament.

“Diplomats must assess the situation in the country that they work in and report their assessments to their country’s capital, but participation in political life, by blatantly issuing instructions to gatherings of opposition activists, is against the Vienna Convention on Diplomatic Relations,” the minister told senators.

The press secretary of the US Embassy in Moscow, Maria Olson, called Lavrov’s accusations “false” and warned that they could undermine the efforts to put Russia-US relations on a more stable footing.

The statements were made shortly after the upper house of parliament had confirmed March 18 as the date for the 2018 Russian presidential election.

The post Russia flags reciprocal ban on US monitors at next year’s elections appeared first on News Wire Now.

Pelosi: House will Shift to Electronic Floor Documents to Combat the Spread of Virus