BUENOS AIRES, Argentina —Memories of dramatic late-night negotiations, painful setbacks and sometimes surprising successes will be on the minds of trade ministers from 164 World Trade Organization member countries Sunday when they launch their 11th ministerial conference in this South American capital.

Their goal? To safeguard and advance multilateral trade rules that originated almost 70 years ago at a time when the architect of much of that system, the United States, retreats from its international role under President Donald Trump.

The Buenos Aires ministerial is set to become a crucial test for the future of global trade, and how it fares in a world no longer under U.S. leadership.

Here’s an overview of the biggest milestones and failures of past WTO rounds and meetings so you can watch the upcoming conference like a pro.

Twenty-three countries signed the General Agreement on Tariffs and Trade (GATT) at the Palais des Nations in Geneva. The founding principle was to avoid a return to the protectionist policies that paralyzed the world economy during the Great Depression of the 1930s, when countries sought to shield their own companies and workers by imposing higher tariffs, tighter import quotas and foreign exchange controls. Under GATT, countries agreed in an unprecedented way to jointly reduce tariffs and other trade barriers.

The talks “at times … seemed doomed to fail,” as the WTO retroactively described the Uruguay Round

Parties also agreed to the core principle of non-discrimination, meaning that trade benefits offered to one country have to be made available to all other countries. An exemption can only be made if partners agree on a trade agreement that slashes tariffs between them on a broad scale.

In follow-up negotiations, dubbed “rounds,” the countries — whose number increased to over a hundred by the 1980s — agreed to further reduce tariffs and other export barriers and established joint rules for global trade and customs procedures.

By the mid-1980s, agriculture powerhouses including Argentina, Australia, Brazil, Canada and New Zealand successfully teamed up to pressure the EU’s predecessor, the European Economic Community, and the United States to slash their agricultural subsidies and allow more imports of sensitive products such as beef. 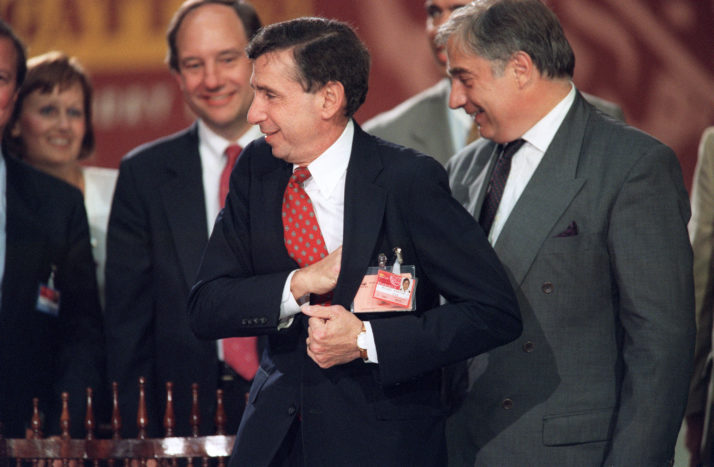 U.S. Trade representative Mickey Kantor followed by General Director of the GATT Peter Sutherland on their way to sign the final act of GATT of the Uruguay Round in Marrakesh in 1994 | Abdelhak Senna/AFP via Getty Images

The talks “at times … seemed doomed to fail,” as the WTO retroactively described the seven-and-a-half-year Uruguay Round, the eighth under the GATT framework. But negotiations ended in 1994 in Marrakesh with the biggest reform of the multilateral trade system since 1947 — the creation of the World Trade Organization.

The WTO’s dispute settlement mechanism, designed to keep economic disputes between countries from escalating into trade wars, became a core element of the organization: In the past 22 years, over 500 cases have been filed and over 350 rulings issued.

The round also extended the reach of international trade rules to encompass the fast-growing services sector, as well as new rules for farming subsidies, tariff-rate quotas for imports such as beef and the harmonization of animal health and food safety standards. For the first time, developing countries played an important role in the talks, but critics felt that it favored wealthier countries.

China shook off the remnants of its adherence to orthodox communism in 2001, and joined the WTO — a sign of the spreading power of global trade, but something Trump later lambasted as a “disaster.”

That year also marked the launch of the Doha Round, an effort to continue lowering trade barriers, that hasn’t yet concluded.

Negotiations bogged down in 2008, as developed countries, led by the U.S., EU and Japan, failed to come to an agreement with developing ones like China, India and Brazil. Poorer countries refused to agree to large-scale tariff cuts unless developed nations significantly reduced farm subsidies that were propping their agricultural exports, such as Europe’s Common Agricultural Policy.

“I’m not risking the livelihood of millions of farmers,” said Kamal Nath, the Indian trade minister at the time.

Following years of stalemate in the Doha Round, the 2013 ministerial conference in Bali brought fresh impetus to the WTO. Countries agreed to the “Bali package” for lowering trade barriers, notably through the Trade Facilitation Agreement, the WTO’s first full-fledged multilateral trade agreement that took effect in February of this year.

It first seemed like mission impossible — but then in the final day of extended negotiations in the Kenyan capital, ministers reached a historic deal. The “Nairobi package” helped the world’s poorest countries through preferential treatment for exports, services regulations and, most notably, the agreement by richer countries like the U.S. or Europe to abolish farm export subsidies. 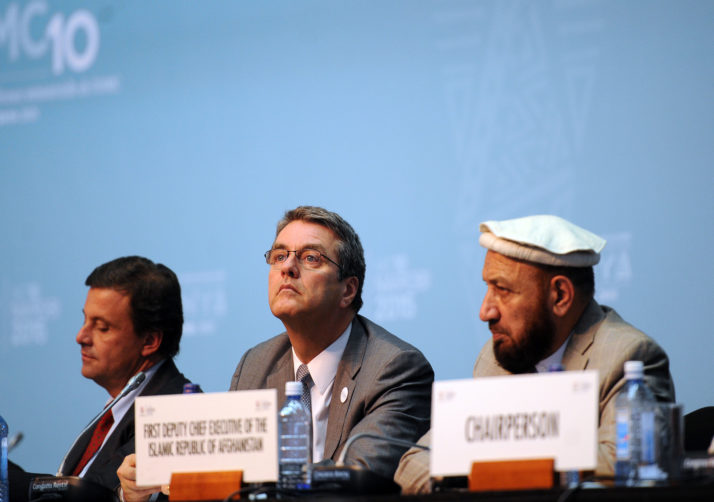 WTO Director General Roberto Azevêdo called it the “most significant outcome on agriculture” since the WTO was founded.

Buenos Aires 2017: Scrambling for a future

The Buenos Aires ministerial was intended to achieve agreement on core issues like domestic support for agriculture, fishery subsidies, e-commerce rules and domestic regulation of services. Instead, countries will expend their efforts on safeguarding the future of the multilateral trade order after Trump’s attacks on the WTO, and U.S. threats to paralyze its dispute settlement mechanism.

Read more about what’s at stake in Argentina.