LONDON — The U.K. will pay no upfront Brexit divorce bill to the European Union but will instead continue to act “as if [it] remained a member state” by meeting its ongoing liabilities as and when they arise for decades to come, according to a draft text of a joint agreement with the EU.

The clause forms part of a proposed draft agreement between London and Brussels that was circulated among U.K. officials Monday, the contents of which have been shared with POLITICO. It is a version of the text that was close to being finalized by Prime Minister Theresa May and Commission President Jean-Claude Juncker before Northern Ireland’s Democratic Unionist Party pulled the plug on the deal in a dramatic 11th-hour reversal for the U.K. prime minister.

The details of the document, according to a U.K. official who was given the draft, covers the three phase one issues of money, Northern Ireland and citizens’ rights, which the European Union has stipulated must be sufficiently resolved before the negotiations can move on to the U.K.’s future relationship with the bloc.

The 15-page draft agreement lays out the scope of the U.K.’s financial settlement with Brussels as well as the ongoing influence of the European Court of Justice in U.K. legal matters post Brexit. The commitments contained in the document include an agreement that the U.K. shall:

Another U.K. official familiar with the text said that in addition there was an “explicit” reference that the offer is “conditional on an overall agreement which takes into account the framework for a future relationship and an early agreement on transition,” raising the prospect that it could all be withdrawn should the talks break down.

The text went through a number of changes on Monday as officials sought to fine-tune the final document and could yet be altered in the last-minute horse-trading between London, Belfast, Dublin and Brussels as a compromise is negotiated. However, officials believe most of the agreement has been locked in, with Juncker insisting Monday that only “two or three” issues remain outstanding.

“May wants the shortest possible time limit. The EU wants 15 years” — Philippe Lamberts, the president of the Greens in the European Parliament

While the financial settlement was long seen as the most politically toxic, it is the one issue on which agreement has been reached, according to one U.K. official familiar with the state of the talks.

On Northern Ireland, a deal had been agreed to ensure regulatory “alignment” on the island of Ireland until the DUP warned it was unacceptable halfway through May’s crunch lunch meeting with Juncker.

The role of the European Court of Justice in the protection of EU citizens’ rights in the U.K. after Brexit, however, remains unresolved between London and Brussels, although an agreement is close.

According to the draft of the document partially shared with POLITICO, the U.K. has pledged to take “due regard” of ECJ rulings before Brexit day and has agreed a system in which the U.K. can ask for the Luxembourg court’s interpretation in cases — although according to U.K. officials this would not be binding.

According to the draft document, however, the U.K. wanted to insert a sunset clause limiting the ECJ’s role in U.K. legal disputes. The number of years was left blank in the document, indicating that it was the subject of negotiation.

“May wants the shortest possible time limit,” said Philippe Lamberts, the president of the Greens in the European Parliament who was briefed on the draft agreement Monday morning. “The EU wants 15 years.” 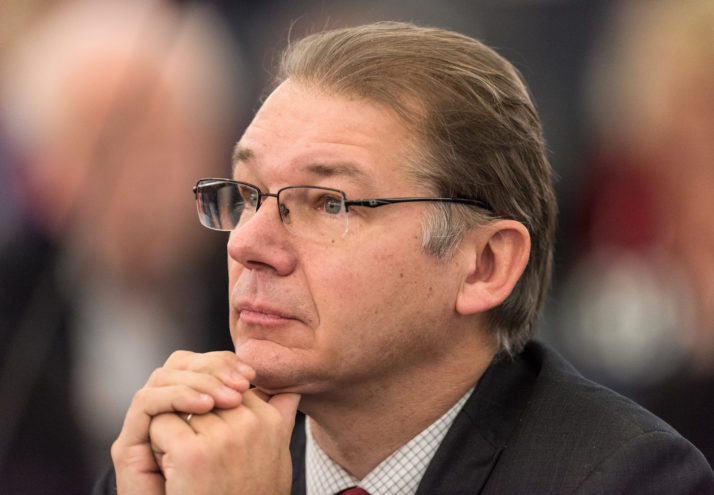 Philippe Lamberts in the European Parliament in Strasbourg | Patrick Seeger/EPA

Lamberts was part of a group of MEPs from the Parliament’s Brexit steering group who met with Juncker on Monday before the lunch. The Belgian MEP added that the sunset clause was “one of the issues that remains under discussion.” He said the British offer was “around 10 years.”

In the end, the financial settlement was the easiest of the three issues to solve with the U.K. prime minister agreeing the components of the future bill, the “principles” for calculating the value and how it will be paid.

However, while the broad formula for calculating the final bill is set out in detail over four and a half pages there is no smoking gun figure or percentage of the total EU budget. Those issues have been kicked into phase two of the negotiations.

Here are the details of the draft agreement shared with U.K. officials:

— Sunset clause. The sunset clause limiting the number of years the ECJ retains its proposed advisory role in U.K. law has been left blank to be agreed between now and the European Council on December 14.

— Due regard for ECJ case law. The draft agreement says the U.K. shall have “due regard” to ECJ case law before Brexit day and sets out how the U.K. can ask the ECJ for interpretation of EU law where necessary. But according to one U.K. official, nothing in the document says U.K. courts will be bound by the ECJ’s advice. “Taking guidance from, rather than referring to as the ultimate arbiter,” according to the official.

— Independent authority. The draft proposes a new independent national authority in the U.K. to monitor citizens’ rights cases. It says the European Commission will play a similar role on the EU side, but leaves open a suggestion that the EU should set up a similarly independent body to mirror the U.K. system.

The section covering the U.K.’s ongoing financial liabilities runs to four and a half pages, broken down into four sections.

— EU multi-year budget. As Theresa May set out in her Florence speech in September, the document says that the U.K. will cover its share of the EU’s multi-annual financial framework (MFF) — its budget — which runs up until December 31, 2020.

— Reste à liquider. The second component is the reste à liquider — or outstanding budget commitments for projects which haven’t started or aren’t completed. The U.K. has vowed to honor commitments made during the seven-year MFF budget period until December 31, 2020. Some of these expenses will become due after that date, though.

— Contingent liabilities and corresponding assets. For example, the loans the EU has given to countries like Ukraine which the U.K. has promised to stand behind should they turn bad. A clause has been inserted into this section to protect the U.K. in the event of a future default ensuring that in the event of liabilities being triggered, the U.K. will receive its share of any subsequent recoveries, the draft agreement states.

— Space programs. The EU assets relating to space programs are not part of the financial settlement.

— No lump sum. The U.K. and EU have agreed not to settle the debt in one lump sum payment. Payments arising from the financial settlement “will become due as if the UK had remained a member state,” according to the U.K. official, paraphrasing the agreed text. In particular, the U.K. will not be required to “incur expenditures earlier than would be the case had it remained a member state” unless this is agreed by both sides. “We are going to pay the bills as they come up,” explained the U.K. official.

— No final figure. One of the benefits to this approach, according to the U.K. official, is that it is very difficult to work out how many billions the U.K will eventually pay, especially when it comes to pensions which could come 40 years down the line. It also means that the U.K. pays for the actual cost of EU commitments, not the forecast amount. A figure for the total bill, or a percentage of the EU budget the U.K. has agreed to pay, is not in the draft document.

— Future costs. The ongoing cost of funding European Union workers’ pensions ”will be paid when these amounts fall due,” leaving the U.K. on the hook for costs drifting well into the future.

Part three of the money chapter covers arrangements for “continued participation” in EU programs. “We may wish to participate in some of the programs post member state,” explained the U.K. official. These are not specified at this stage but could include the Horizon 2020 research program, for example.

Part four covers other components of the EU like the European Investment Bank, the European Central Bank and European Union Trust Funds. According to the draft agreement, the U.K. will continue to be a party to the European Development Fund until December 31, 2020.

The post UK will not pay lump sum Brexit bill, according to draft agreement appeared first on News Wire Now.